A TASTE OF HONEY – REVIEW OF NATIONAL THEATRE PRODUCTION

The appearance and success of Shelagh Delaney’s A Taste of Honey became a theatrical legend almost from the beginning. A 19-year old woman from a working-class background, with little education and almost no knowledge of theatre wrote a play about people on the bottom rung of the social ladder. She sent the script to the legendary Joan Littlewood and the play was presented by the Theatre Workshop in Stratford. Not Stratford-upon-Avon but the suburb of London.

It was a smashing success and was made into a film. Delaney continued writing but she never duplicated the success of A Taste of Honey. She died in 2011.

The play has been revived by the National Theatre in a superbly acted production that also contains some interesting choices by director Bijan Sheibani.

The plot involves the lives of Helen (Jodi Prenger), a buxom, crude woman described by Delaney as a “semi-whore,” her daughter Jo (Gemma Dobson) and several men who enter their lives. They live in a dump in Manchester, near a slaughterhouse and a smelly river. The two women show contempt for each other but there are suggestions of affection. There are indications of artistic talent that was quashed by poverty and life choices. 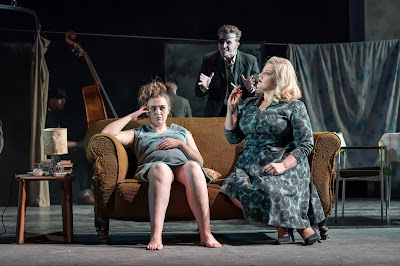 Gemma Dobson, Tom Varey and Jodie Prenger. Photo: Marc Brenner
There are three men in their lives. Peter (Tom Varey), a car salesman, is one of Helen’s customers. Jimmie (Durone Stokes) is a black sailor who promises marriage and leaves Jo pregnant. Geoffrey is a decent young man who happens to be homosexual.

It is a richly textured play with numerous undertones in its description of the horrors and degradation of poverty and the strength to survive it however by any means available.

The issue of the production is the choices made by director Bijan Sheibani. The play begins with Helen and Jo arriving at the cold and dreary apartment in a slum of Manchester. Sheibani does not find that satisfactory and he has the play open in a pub. There is a band playing jazz music and Helen drinks and sings. When she finishes her song, a large crew rushes on the stage with the furniture for the apartment and Delaney’s opening lines are heard. The stage crew is used several times to move props on and off the stage.

There are many references to music in the play but there is no mention of a band staying on the stage throughout the performance. This is what Sheibani does. The musicians do nothing most of the time, but they do play a few bars here and there. In one scene change, Geoff does a sizeable song and dance routine for which I can find no explanation. The musicians add nothing, but they do change the tenor of the play which you may classify as slightly annoying or ridiculous.

The production is saved by outstanding performances. Jodie Prenger delivers a Helen who is sluttish, selfish, crude and odious. Her maternal instinct, to the extent that it exists, appears infrequently and it is rebuffed by her daughter. A stellar performance. 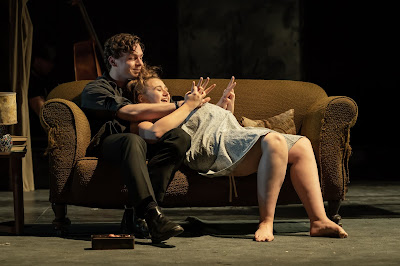 Gemma Dobson’s Jo is a pathetic teenager who hates her mother and is looking for something or someone that she is not even sure of. We feel sorry her for her without liking her and are never quite sure why or if we dislike her. Dobson’s finely balanced performance is a pleasure to watch.

Tom Varey as Peter is a drunk cad, the type of slimeball that brags about his conquest of women, lies about his prowess and descends to proposing marriage to a woman like Helen. She probably could be had for a few bob.

Durone Stokes as Jimmie the sailor is a “nice guy” who is looking for sex and finds the eternal formula for getting it: offer love, promise marriage, have sex and disappear. Stuart Thomson is excellent as Geoff who befriends Jo and is basically the soul of decency in an indecent situation.

The actors speak in a thick Manchester accent that is not always comprehensible to the untuned ear. There were times when I had to strain to understand what was being said and looked for surtitles.

The creation of A Taste of Honey is a marvelous story of an almost instantaneous eruption of talent in a most unlikely of places that results in marvelous theatre generations later.
__________
The Taste of Honey by Shelagh Delaney continues until February 29, 2020 at Trafalgar Studios, 14 Whitehall, The Norman Conquests (2013)
Photos by Cylla von Tiedemann
London, England.  http://www.nationaltheatre.org.uk/