Groundling Theatre Company and Crow’s Theatre offer a production of Julius Caesar that is original, powerful, superbly directed and terrifically acted. It is done in the small Guloien Theatre on Carlaw Avenue which has been converted into a theatre-in-the-round that gives the play immediacy and muscle.

The production is not entirely faithful to Shakespeare but most of the changes and additions add to the effectiveness of the performance. It is done in modern dress and opens in a broadcast studio where they are reporting the return of the conqueror Caesar. The reporters give background about the holiday on which Caesar returns (the Lupercalia) and generate the type of excitement and anticipation of a sports team’s cup victory parade. The scene in the original play with the tribunes Flavius and Marullus berating the commoners on the street is omitted with no great loss. 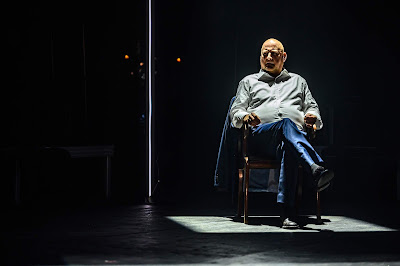 Jim Mezon as Julius Caesar. Photo: Dahlia Katz
Director Chris Abraham in fact does the entire play with eleven actors (some of the best around) who perform a couple of dozen roles out of the possible 49. He even adds a couple of characters like Coriolanus and Felix. Diego Matamoros, for example, handles five roles quite handily.
There are handguns and semi-automatics, heavily armed soldiers and a sense of immediacy that make the play appear new and exciting. And it is. The presence of gums makes it necessary for Caesar to be shot instead of stabbed and here Abraham makes a choice about the fall of the great Roman.


In this production, Casca shoots first and Caesar falls down. The other assassins do the same. The last one to partake in the assassination is Brutus and Caesar utters the famous words “Et tu, Brute? Then fall, Caesar.” Brutus shoots Caesar who is already on the ground. Would it not be preferable for Caesar to be staggering after the first shots and then to stagger towards Brutus and realize that his friend Brutus, the man who says he loves him, is part of the gang. It is the ultimate expression of ingratitude and treachery. It is at this point that Caesar falls dead. What counts for him in the last moments of his life is not the mortal wounds delivered by the politicians but the ultimate betrayal by his friend.

Jim Mezon as Caesar is supremely arrogant, extravagant and Mussolinian in his showmanship. People with common sense and respect for republican ideals find his egomania unacceptable and getting rid of him appears like a good idea.

Dion Johnstone plays the principled and upright Brutus. A superb portrayal of a man who wants to save Rome from the ambition of a friend whom he happens to love but not as much as he loves Rome. 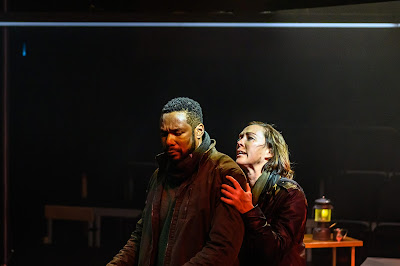 Dion Johnstone as Brutus and Moya O'Connell as Cassius. Photo: Dahlia Katz
The conniving, even slithery, Cassius is played by Moya O’Connell. She is a woman, of course, and the characterization of the jealous and envious person is brilliant.

Graham Abbey has all the attributes for a great Mark Antony. He has the athletic build, the forceful presence and the vocal intonation of the man who turns the Roman mob into a rebellious and destructive force.

Sarah Afful deserves kudos for her performance in three very different roles. She plays Calpurnia, Caesar’s frightened wife, the conspirator Cinna and the egotistical Octavius who seems born to arrogance.

Michelle Giroux plays the marvelous wife of Brutus, Portia. She is a noble lady and a sympathetic wife and Giroux performs her superbly. She also plays the minor roles of Popilius and Varro.

Walter Borden lends his sonorous voice to several characters as do Jani Lauzon and Ryan Cunningham with creditable results.

The heads of animals worn for brief moments by some of the actors, did nothing for me. The sound effects by Thomas Ryder Payne and the Set and Lighting bu Lorenzo Savoini were all dramatic and to the point.

The additional writing by Zack Russell tightened Shakespeare’s text and was mostly positive except for the bit at the end. The original play ends with a magnanimous and eloquent eulogy of Brutus by Mark Antony. He is talking about his enemy yet refers to him as “the noblest Roman of them all.” The sometimes childish Octavius orders that Brutus be given an honourable burial befitting a soldier. They both strike notes of grace and that is where the play ends and so should this exceptional production.
_______________
Julius Caesar by William Shakespeare in a production by Groundling Theatre Company and Crow’s Theatre continues until February 2, 2020 at the Streetcar Crowsnest Theatre, 345 Carlaw Avenue, Toronto, Ontario M4M 2T1. http://crowstheatre.com/

James Karas is the Senior Editor - Culture of The Greek Press
Posted by James Karas at 10:31 PM