Gregory Doran, the Artistic Director of the Royal Shakespeare Company has assigned the production of Measure for Measure to himself, a difficult play to direct especially in the current atmosphere. More about this later.

Doran places the play in early twentieth century Vienna, a city of culture and style but also of prostitution and debauchery. The production opens in a hall where gentlemen in smart officers’ uniforms waltz with ladies in long, elegant gowns. The Duke of Vienna halts the dancing and proceeds to assign his duties to the strict and puritanical Angelo in order to tighten up the morality of the city. Brothels are flourishing, sexual licentiousness is out of control and something must be done. The easy-going Duke will “leave” so that Angelo will have a free hand to enforce the law.

Doran has a strong cast. The key players are the novice nun Isabella and the Tartuffian hypocrite Angelo. When Isabella goes to plead for the release of her brother Claudio who had been condemned to death for impregnating his fiancée, Angelo proposes a quid pro quo: her virginal body for her brother’s release. 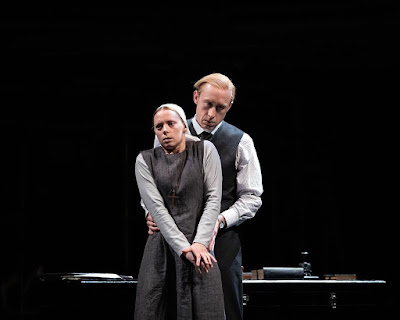 Lucy Phelps and Sandy Grierson in Measure for Measure.  Photo: Helen Maybanks.
Lucy Phelps is a superb Isabella. She is modestly attractive and innocent (making her more desirable). She resists with admirable tenacity and is put through hell for reasons unknown. Sandy Grierson as Angelo is the pillar of virtue and the paragon of slime exudes righteousness and practices Weinsteinesque sexual morality. He is frightful in his abuse of power and certainty that he is invincible. No one would believe his accuser.

Antony Byrne as the Duke is always difficult to fathom. Byrne plays him as a somewhat light-hearted character who means well but lacks a few points in his human quotient to comprehend his actions.

The funniest person from the government side is Michael Patrick as Constable Elbow who tortures the English language but provides gales of laughter in the process. In a smaller role but also entertaining is Patrick Brennan as Abhorson the executioner who takes his profession so seriously, he considers it a mystery. Brennan also plays Friar Thomas.

The characters from the suburban brothels are more fun. Graeme Brookes in drag as the bawd Mistress Overdone is simply wonderful and hilarious. Joseph Arkley as the “fantastic” Lucio comes out as a dapper gentleman in a perfectly tailored suit, silk scarf and spats. That’s the surface. Underneath he is a slimeball. The pimp Pompey, well dressed and wearing a bowler, is proud of his professional standing. Between the court and the brothels, we have the prison where the prisoner Bernadine (again Graeme Brooks) is permanently and uproariously drunk and the last thing he wants is to be executed or released.

Stephen Brimson Lewis’ design calls for a minimum of set props and relies on Simon Spencer’s lighting. It all works quite effectively.

I mention the lighter side of the production that Doran pays attention to because this is a play that needs humour very badly. After all Measure for Measure is classified as a comedy but there are issues, especially in the final act, that are no laughing matter. 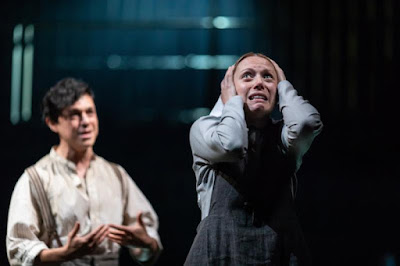 Lucy Phelps and James Cooney as Isabella and Claudio. Photo:Helen Maybanks/RSC
Disentangling the plot lines of Measure for Measure is a bit problematic partly because the Duke wants all to be resolved in public right at the end of the play. It is a play and dramatic necessities require a certain structure. It was written some 400 years ago and it is unadvisable to judge it by today’s standards. But times are different. Prince Andrew had sex with a 17-year old purchased for him by a billionaire and he denies it, insisting that a photograph taken of him with the girl is fake. Harvey Weinstein abused dozens of women while in a position of power and he denies it all saying it was consensual.

Near the end of Measure when Isabella accuses Angelo of trying to seduce her, he denies it and the Duke (pretends) to go along with it. No, Angelo could not possibly have done that. When Angelo denies having sex with Mariana (Sophie Khan Levy), his former fiancée, the same thing happens. There is a frightful consistency is there not?

The final resolution has the same problems. The despicable Angelo has to marry Mariana
because he had sex with her. The dashing Lucio has to marry the nicely named Kate
Keepdown who walks on stage with baby carriage. She gets a laugh and so do we. Finally, the Duke extends his hand in an offer of marriage to Isabella. She does not respond.

All of this is done at the expense of the women. Perhaps, If, I may coin a phrase, we can have our cake and eat it too, we can be aware of its social implications and enjoy a fine production of a problematic play.
_________
Measure for Measure by William Shakespeare played until January 18, 2020 at the Barbican Theatre, London, England. It now continues its tour in Canterbury, Plymouth, Nottingham, Newcastle and Blackpool on various dates. Full details here:  https://www.rsc.org.uk/whats-on/The Norman Conquests (2013)
Photos by Cylla von Tiedemann