All white people must be racists (?). All blacks must be victims of racism (?).

These are two of the questions or, if you will, issues raised by Gurpreet Kaur Bhatti in A Kind of People now playing at the Royal Court Theatre in London. It is a powerful play with some outstanding acting that that is riveting in every respect.

Bhatti starts her play with a happy gathering to celebrate the birthday of a friend. It is a racially mixed crowd. The hosts are a happily married couple, Nicky (white) and her husband Gary (black).

The guests are Mo (Pakistani) and his wife Anjum, also Pakistani who wears a hijab more as a sword than an expression of devotion to her Muslim faith. Gary’s sister Karen cares more about having a good time than any racial or social issues. Mark (white) is Gary’s co-worker and seems like a decent guy but you may wish to reserve judgment on him

But there is a surprise guest, Victoria, Gary’s boss, drops in. and proceeds to get drunk. She makes some clearly racist gestures and leaves. 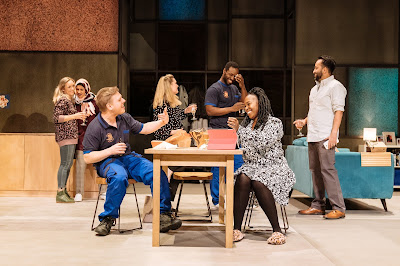 The cast of A Kind of People. Photo: Manuel Harlan
The people in the play have far more than racial problems. There is the issue of upward social mobility. Gary and Nicky live in subsidized (council) housing and are dreaming of him getting a promotion to be able to buy a house. They are struggling to get their children in better schools as a steppingstone to a better life.

The clash comes when Gary does not get the promotion and is convinced that he was rejected because of Victoria’s racism. His relationship with Nicky falters and his whole world collapses.

The deterioration of Nicky and Gary’s world culminates in an extraordinary emotional climax that leaves the audience stunned. There is a brief epilogue and I will not disclose its content.

Claire-Louise Cordwell as Nicky gives a performance of enormous depth and power. Her love for Gary and devotion to her children is immeasurable. When her father found out that she was in love with a black man he beat her up and broke two of her ribs. Cordwell displays Nicky’s power to withstand anything in defence of her family and her dreams of a better life. In the climactic scene she is simply heart-wrenching.

Richie Campbell as Gary is a man of pride and principal. He is unwilling to compromise those characteristics but he does not realize that pride can become arrogance and failure to embrace realism over principal in the face of self-destruction makes no sense. We see all of that brilliantly conveyed by Campbell in his bravura performance.

Gary’s boss Victoria, impeccably played by Amy Morgan, displays the cool, fair-minded white person who can hide her racism under a veneer of good conduct. She is the most dangerous racist of them all. 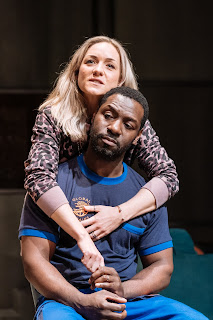 Claire-Louise Cordwell and Richie Campbell. Photo: Manuel Harlan
Petra Letang is a pleasure to watch as Karen, the free-spirited sister of Gary.

The hijab wearing Anjum played by Manjinder Virk shows another way of dealing with racists. She knows she can’t win so she says to hell with them. She fights them by sticking to her own kind, thumbing her nose at them and beating them wherever she can.

Gary’s friend Mark played well as a clown with a dark side by Thomas Coompbes is white and a supporter of his buddy. But watch out.

Anna Fleischie’s set of a kitchen and living room for Gary and Nicky’s apartment is easily changed to Victoria’s office and a staff room and is suitable.

Kudos to director Michael Buffong for expert handling of the cast and the pace of the production and providing us with an extraordinary night at the theatre.
________
A Kind of People by Gurpreet Kaur Bhatti continues until January 18, 2020 at the Royal Court Theatre, Sloane Square, London SW1W 8AS. Box office: 020 7565 5000. www.royalcourttheatre.com/

James Karas is the Senior Editor - Culture of The Greek Press
Posted by James Karas at 7:45 PM