That is the ultimate question in Tony Tortora’s new play Cops, now playing at the Southwark Playhouse in London.

I can’t find much information about the playwright but he is an American living in England, a man in his late 70s. Cops is his second play after Churchill which was produced in 2013.

The play takes place in a police station in Chicago in 1957 and it involves five cops of diverse backgrounds. Playing in the tiny Southwark Playhouse, the cops are hemmed in a tiny space where four desks, and two lookout areas called for.

Tortora wants to develop the characters of the cops and tell us the story of general and specific corruption in Chicago with the main plot line being the pursuit of a witness in a case involving organized crime. They know that the witness is around and they stake him out but someone is leaking information and they cannot catch him. Who is the culprit? 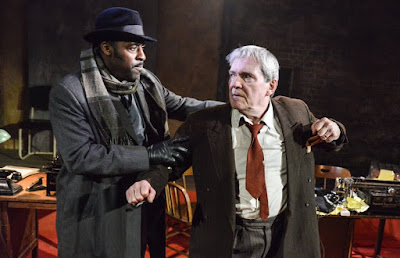 Daniel Francis and Roger Alborough. Photo: Robert Day
The central characters of the drama are Stan (Roger Alborough), a crotchety and corrupt old cop who joined the force in 1906. He argues and fights with everybody. Rosey (Daniel Francis) is black who provides us with commentary about the state of blacks in Chicago.

Eulee (James Sobol Kelly) is Polish, Catholic and decent (his mother wanted him to become a priest) and appears to be a notch above the others as a policeman and a human being. Foxy (Jack Flammiger) is a handsome young college boy from a rich family with a father who has donated millions to the police.  Has his father made him become a cop so he can be informed about what is happening with the police? A question to be asked.

The fifth cop, Hurley (Ben Keaton) is seen only a couple of times. When the others are staking out the Mafia witness, Hurley is sent to the roof where he is freezing.

In his attempt to give us background information about the characters, Tortora moves away from the issue at hand and the pace of the play screeches to a halt. Someone from personnel delivers an envelope to the unit. It falls to the floor and no one picks it up or deigns to open it. I don’t know how much time is wasted discussing who will pick up the letter, who the in the end will open the envelope and what it may contain.

All of the charters except Hurley go off on tangents about corruption, organized crime, sports and other matters that do not help in building up the suspense of who is the snitch. I do not want to reveal the outcome but it is so slow in coming it is hard to maintain one’s interest.

The acting and directing are uneven. Alborough muffs more than a few lines and director Andy Jordan does not control the pace or the volume. It is a tough venue to work in but a more disciplined approach would have helped.

Tortora has a good idea for a play in telling a story about cops and adding some humour but he needs a dramaturg to tighten up the script.
____________________
Cops by Tony Tortora continues until February 1, 2020 at the Southwark Playhouse, 77-85 Newington Causeway, London, England. https://southwarkplayhouse.co.uk/

James Karas is the Senior Editor - Culture of The Greek Press
Posted by James Karas at 4:27 PM