AS YOU LIKE IT - REVIEW OF ROYAL SHAKESPEARE COMPANY PRODUCTION

The Royal Shakespeare Company never seems to rest. Its main season is in Stratford-upon-Avon beginning in the spring and ending sometime in the fall but the show goes on with productions touring around the country. In the meantime there are shows still playing in Stratford.

As You Like It, one of Shakespeare’s most wonderful comedies of love, gets a joyful, marvelously acted and brilliantly directed production. Its main vehicle is Shakespeare’s language. Director Kimberley Sykes and a fine cast want us to hear every word of the play, pronounced immaculately and properly. The actors are aware of the poetry and beauty of the text and want us to enjoy it. We do. 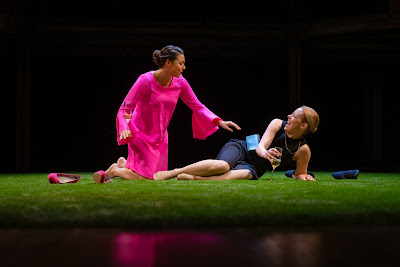 Sophie Khan Levy and Lucy Phelps in As You Like It. Photo:Topher McGrillis. ©RSC
But there is much more than that. As You Like It is about the pursuit of love in various manifestations. Yes, there are political issues of usurpation, social issues of life in Arcadia or Arden in this case and the like. But the driving force of the play is love.

We see the cousins Rosalind and Celia go to the Forest of Arden disguised as Ganymede and Aliena. Duke Senior was deposed by his nasty brother Duke Frederick and went off to the Forest of Arden for a life of contentment. He has a colourful group of companions and is joined by his daughter Rosalind and his brother’s daughter Celia. They will seek love.

There are shepherds and shepherdesses who are just as eager for love and we will run into a delightful combination of pursuers and pursued. Shakespeare provides it all and all you need is a fine cast to deliver and delight.

Lucy Phelps who plays Rosalind and is disguised as Ganymede will pretend that she is Rosalind so that Orlando (David Ajao) will woo her. He has been thrown out by his evil brother Oliver (Leo Wan) and loves Rosalind to distraction but where is she? Phelps is energetic, comic, and just plain wonderful. We know where that plot strand leads but we enjoy watching it.

Sophie Khan Levy is a beautiful and splendid-voiced Celia, a lovely modern woman. 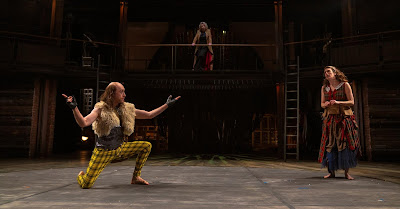 Sandy Grierson, Sophie Stanton and Charlotte Arrowsmith.  Photo:Topher McGrillis. ©RSC
The rustics are even more fun. William (Tom Dawze) loves Audrey (Charlotte Arrowsmith) but she loves Touchstone (Sandy Grierson). Silvia (Amelia Donkor) loves Phoebe (Laura Elsworthy) who loves Ganymede. Celia falls in love with the reformed Oliver. Yes, there are a few gender changes. Silvius of the original becomes Silvia; Amiens, usually a male role, is played by Emily Johnstone who also plays Le Beau. Jacques is played by Sophie Stanton. (A minor complaint about her delivery of The Seven Ages of Man. Speech. She needed to speak a bit more loudly and add some life into it.)

The gender swapping works very well because at the end of the play The Duke’s attendants are paired off and Audrey who did not like Silvius may be happier with Sylvia.
The production is done with the minimum of sets and props.  In the opening scenes there is only a large green rug which is made into a wrestling rink for Orlando and Charles the Wrestler (Graeme Brookes). Judicious use of lighting produces the impression of a forest without much fuss. But there is a gigantic puppet of Hymen in the end to help with the marriages (it is his job after all)

Sykes does not hesitate to use the audience to evoke laughter, but it is done judiciously providing in all a highly enjoyable night at the theatre.
__________
As You Like It by William Shakespeare continues until January 18, 2020 at the Barbican Theatre, London, England. It then continues its tour to Canterbury, Plymouth, Nottingham, Newcastle and Blackpool on various dates. Full details here:  https://www.rsc.org.uk/whats-on/The Norman Conquests (2013)
Photos by Cylla von Tiedemann