My Brilliant Friend is a play performed in two parts over five and a half hours, less two 20-minute intermissions at the National Theatre in London It is based Elena Ferrante’s four volumes of fiction collectively called her Neapolitan Novels adapted for the stage by April De Angelis.

The play has some forty characters with “other parts played by members of the company.” The company consists of twenty-three actors and that gives you a hint of the scope of the two parts of the play.

The play takes place in Naples after World War II and it covers the period up to Silvio Berlusconi’s presidency if not even later. That is a long time in the lives of a lot of people but Ferrante spreads her story much more widely than just covering the lives of a handful of main characters with the rest appearing in supporting roles.

She wants to cover numerous aspects of the history of Naples and indeed Italy during that time frame from the personal lives and the relationships of some of the main characters, to social changes, political upheavals, justice and, crucially, the position of women. You can assume that their position was bad. 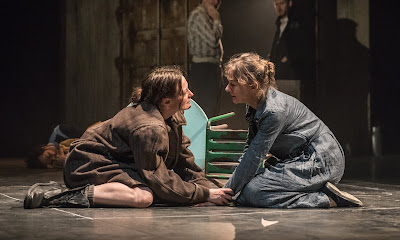 We are dealing with a poorer neighbourhood of Naples and the following families are identified. The Greco family is of prime importance because Elena (Niamh Cusack), the daughter of the porter Vittorio (Martin Hyder) is one of the main characters in the play. She has a mother, two younger brothers and a sister and they play variously important roles in the action.

The Cerullo family is of equal importance to the Grecos because Lila (Catherine McCormack), the daughter of shoemaker Fernando (Martin Hyder), is the friend of Elena. The friendship between the two women is the most important personal story of the play as it goes through various permutations. Nunzia (Badria Timini) is Lila’s mother and she has a brother Rino (David Judge) who plays an important part in the numerous stories of the play.

The Carracci family occupies the very important position as a representative of organized crime. The head of the family Don Achille (Al Nedjari) disappears early but his sons Stefano (Jonah Russell) and Alfonso (Colin Ryan) remain until the end of both parts of the play. Stefano marries Lila and brutally rapes her on their wedding night.

The Cappuccio family is a working-class trio with Melina (Amiera Darwish), a mentally deranged cleaner, her son Antonio (Justin Avoth) the car mechanic with a romantic interest in Elena, and daughter Ada (Lizabeth Mary Williams).

The Sarratore family consists of Nino (Ben Turner), a school friend of Elena’s and Lila’s and his parents Donato (Al Nedjari) and Lidia (Kazrena James). Nino falls in love with Lila after her disastrous marriage to Stafano. Donato has sex with Elena.

The Solara family is another trio of criminals consisting of the brutal Manuala (Emily Mytton) and her two sons Marcello (Ira Mandela Siobhan) and Michele (Adam Burton). 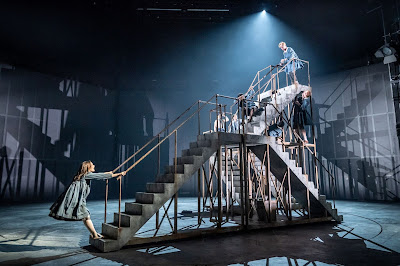 Elena and Lila are attractive women and they go through several partners and have a rocky relationship between them. Elena becomes a successful novelist while Lila is not permitted to pursue higher education and ends up working in a sausage factory. It is a horrible job where she is sexually abused. The relationship of the two women is the most important aspect of the play.

With organized crime present, there are a few shootings. The politics of fascism and communism are present as is the fight for workers’ rights, strikes, brutal treatment and general injustice. Ferrante/De Angelis try to paint life in Italy on a huge canvas.

The play is organized around short scenes broken by rear stage projections, moments of music or songs, dancing, strobe lights and the like. Watching student or workers’ demonstrations, work in a slaughterhouse and numerous other clips made no sense. There are too many stories over a very lengthy time frame and it was not possible to keep track of every plot strand or who is who and who did what to whom.

The set by Soutra Gilmour consisted of several mobile ladders that were frequently repositioned on the stage. The twenty or so actors were brought on stage frequently and the ladders provided a place to run up on or around. After all, the play represents a part of a city and not just a few individuals.

The production struck me as too ambitious by a half. Bringing that many characters and that many stories even within five hours is unwieldy and impossible to focus on.

I must add unstinting praise for the acting especially of Cusack and McCormack. Cusack was on the stage almost all the time and she had to go through numerous emotional ranges. McCormack did superb work in a role that makes enormous demands.

Director Melly Still has a huge job to do and significant credit is due to her for being able to keep the whole thing moving.
__________
My Brilliant Friend, Parts 1 and 2 based on Elena Ferrante’s Neapolitan Novels adapted by April De Angelis continues until February 22, 2020 at the national Theatre, South Bank, The Norman Conquests (2013)
Photos by Cylla von Tiedemann
London, England.  http://www.nationaltheatre.org.uk/

James Karas is the Senior Editor - Culture of The Greek Press
Posted by James Karas at 8:05 PM