THE BARBER OF SEVILLE – REVIEW OF 2020 COC PRODUCTION

The Canadian Opera Company dispels Toronto’s winter blues with a delicious production of Rossini’s The Barber of Seville. There may have been the odd, minor glitch but this was a highly enjoyable and splendid production.

The opera has a vocal, musical and comic momentum that can be built on with sufficient changes of pace that can take and keep the audience entertained in the wonderful world of Seville of no particular era. There we find Dr. Bartolo, an old fool who wants to marry his lovely ward Rosina for her money and much more. There is Almaviva, a handsome count who is stricken by Rosina’s beauty and has fallen hopelessly in love with her. There is Basilio, a foolish and corrupt singing teacher and, of course, the incomparable, versatile, ever-inventive town barber and factotum Figaro. 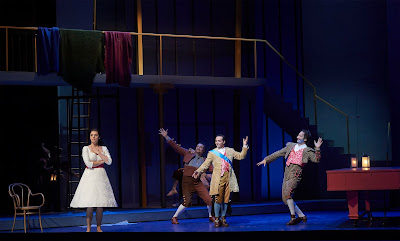 Emily D’Angelo as Rosina, Joel Allison as Fiorello, Santiago Ballerini as Count Almaviva
and Vito Priante as Figaro in of The Barber of Seville, 2020. Photo: Michael Cooper
Rossini provides some incredible music, arias and ensemble pieces integrated with comic scenes nonpareil. All you need is the musicians and cast to deliver. Let’s start with the highly alluring Rosina in the hands and vocal chords of mezzo-soprano Emily D’Angelo. A Toronto girl! We get to know her (and love her) when she introduces herself in her cavatina “Una voce poco fa.” With energy, panache and sumptuous singing D’Angelo’s Rosina tells us that she is in love with Lindoro and swears that she will have him. She has a thousand tricks up her sleeve and she will not be trifled with by nobody, no how. And the music lesson where she and Lindoro practice an aria is a scrumptious love scene.  Clear?

Lindoro is the Count Almaviva in disguise and Argentinian tenor Santiago Ballerini better be good to deserve a woman like Rosina. Ballerini rises to the occasion with a mellifluous midrange and well achieved high notes. At the beginning, we had a few worrisome moments when we thought we may not be able to hear him (we have to hear you even if you are singing pianissimo) but that concern was dissipated quickly and he turned in a fine performance.

The ardent lovers have opposition to overcome but they also have a powerful ally and the most famous facilitator in opera, Figaro. Italian baritone Vito Priante as Figaro gets one of the most famous entrances with his “Largo al factotum,” a tongue twister of a cavatina that reflects the master schemer. He is far more than a mere factotum. Priante displays comic talent, vocal versatility and gives a superb performance.

Doctor Bartolo is the old geezer who wants the young beauty. He is a comic figure who brings the laughs and has some sonorous singing to do. Italian baritone Renato Girolami does both in a hugely creditable performance. He sang the role in the 2015 production of The Barber of which this is a revival.

His not-too-reliable partner is Basilio done exceptionally well by American bass-baritone Brandon Cedel. He is a reprehensible chap, a master slanderer and a treacherous friend and Cedel sings the role with vocal resonance and agility.

Canadian mezzo-soprano Simona Genga kicks butt in her performance as Rosina’s old maid servant Berta. It’s a small role but she has the beautiful aria that parodies love as a crazy mania in “Il vecchiotto cerca moglie” (The old man seeks a wife). She did a wonderful job and the audience loved her.

The chorus was impressive and the COC Orchestra equally good. The conductor is Speranza Scappucci, a woman. Regretfully and shamefully, we are a long way from not noticing the gender of the conductor but at least there is some progress. 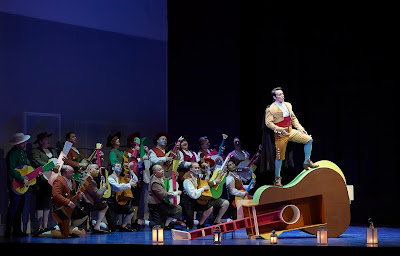 Santiago Ballerini as Count Almaviva (right) in The Barber of Seville, 2020.
Photo: Michael Cooper
The production is directed by Joan Font with set and costumes by Joan Guillén. The directing was excellent for the reasons stated above. But what was the woman sitting on the right side of the stage during the opening scene doing? She never really leaves the stage and she goes from a minor annoyance to being ignored but Font no doubt had something in mind when she put her on,

The costumes were mostly appropriate if not time sensitive. The military uniforms did the job, Rosina wore a nice white dress and the rest were of little concern. But what were those growths on the top of the heads of some of the servants? Are they tufts of hair or Italian sausages?

The set at the beginning shows a vaguely black background and a structure on one side. Change of lighting turns it into Rosina’s residence. Once we are inside her house, the music and singing carry us through and the set becomes of secondary interest.

The gripes are minor compared to the thoroughly enjoyable production that got a well-deserved standing ovation.
_________
The Barber of Seville by Giacomo Rossini with libretto by Cesare Sterbini is being performed eight times between January 19 and February 7, 2020 at the Four Seasons Centre for the Performing Arts, 145 Queen Street West, Toronto, Ontario. Tel:  416-363-6671. www.coc.ca

James Karas is the Senior Editor - Culture of The Greek Press
Posted by James Karas at 12:41 AM