Cyrano de Bergerac is playing to packed houses and enthusiastic audiences at the Playhouse Theatre in London. I went eager to see a play that has several thrilling scenes even though its overall quality is uneven.

Cyrano de Bergerac, was written by Edmond Rostand in 1897 but the program informs us that this production is “freely adapted by Martin Crimp.”

When we enter the theatre, we see an empty stage with three microphone stands. When the lights go down one Lignière (Nima Taleghani) tells us that we are in a theatre waiting for a performance and introduces Christian (Eben Figueiredo), a handsome young soldier and points to certain members of the audience. A large number of actors appear dressed in very ordinary street clothes and after a while the dialogue of the plot is heard. 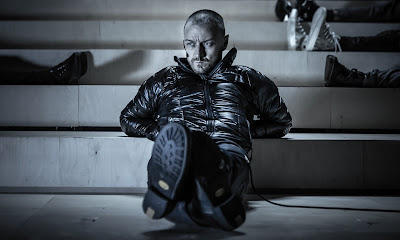 James McAvoy as Cyrano de Bergerac. Photograph: Marc Brenner
To get to the point, we are about to see a rehearsal of Cyrano de Bergerac. There is a very good cast and they know their lines but there is no set, no costumes, no makeup and no blocking. All the players are equipped with microphones on one side of their faces and will take us through the text of the play. They are using Crimp’s free adaptation which is colloquial and uses some clever rhymes. All well and good but, to repeat, this is a rehearsal of the play.

We are eager to see the huge-nosed Cyrano in his poetic splendour and dazzling sword handling bravura and the gorgeous Roxane whose looks can cause hyperventilation. We have seen the handsome Christian already. In their ordinary street clothes, their looks do not match our fervent imagination. They look like talented actors, even graduates of RADA, who may be waiting on tables until they get their next big role.

In a readthrough there is no sword fight, only a sort of mimed affair, and the rest of the scenes are similarly left to the imagination. Cyrano de Bergerac is best known for the balcony scene. You will recall that the verbally challenged Christian (okay, he is a pretty-faced idiot) tries to woo Roxane. She is a woman of beauty and culture and wants to hear poetry. Christian can barely deliver sentences. She stands on her balcony and he is supposed to wax romantic and poetic to make her heart melt. He can’t.

Cyrano steps in under the balcony and while pretending to be Christian delivers an outpouring of love poetry that makes Roxane’s knees shake.  It is the apogee of his life and if he died at that moment he would die happily.

But this is a balcony scene without a balcony, without the theatrical illusion of the intense emotional bliss felt by Cyrano and subsequent disillusionment when Christian kisses Roxane and he gets nothing.

Christian marries Roxane but the marriage is not consummated because he and Cyrano are sent off to war. Cyrano continues the balcony scene by writing love letters to Roxane every day pretending to be Christian. Christian is killed in the war.

The cast of Cyrano de Bergerac. Photo: Marc Brenner
For the next fifteen years Cyrano visits Roxane. He has enemies and is mortally wounded before his last visit. He asks to see Christian’s last letter to her and she lets him read it. It is dusk and he begins to “read” the letter but he is in effect reciting it because he wrote it. In an emotionally charged moment, Roxane realizes that Cyrano was the author of all the letters and he is the one that has loved her all those years. It is a beautiful and moving scene moments before Cyrano’s death.

That is not good enough for Martin Crimp. Cyrano admits to writing all the letters and Roxane is angry with him for deceiving her. She shows no grace or understanding of the depth of love the unloved Cyrano felt for her. He dies accused of duplicity.

Most of the emotion and power of the play is seriously diminished by the knowledge that we are watching the rehearsal of a mauled play. There is a point where Cyrano and Christian kiss and I have no idea what the kiss meant.

The production has some star power that is combined with serious acting talent from the cast. James McAvoy seemed to send tingles down the audience’s spines. They seemed to enjoy the production.

Director Jamie Lloyd is a major force in British theatre and in this case a prime example where the search for originality in the production of a classic leads to an awful night at the theatre.
__________
Cyrano de Bergerac by Edmond Rostand freely adapted by Martin Crimp, in a production by the Jamie Lloyd company, continues until February 29, 2020 at the Playhouse Theatre, Northumberland Avenue, London WC2N 5DE. The Norman Conquests (2013)
Photos by Cylla von Tiedemann
https://www.atgtickets.com/shows/cyrano-de-bergerac/playhouse-theatre/