Lulu Raczka is a young English playwright who has tackled a part of the great myth of the Royal House of Thebes dealing with the rebellious Antigone. Her play Antigone is “after Sophocles” but Raczka puts her own stamp on the work.

Raczka’s Antigone has only two characters, the sisters Antigone and Ismene as teenagers at an undetermined time. In the small New Diorama Theatre, the play begins with slow, pounding, bass music. There is a mound in front of us full of dirt. We see two figures rise out of the dirt and shake if off. They are Antigone (Annabel Baldwin) and Ismene (Rachel Hosker). 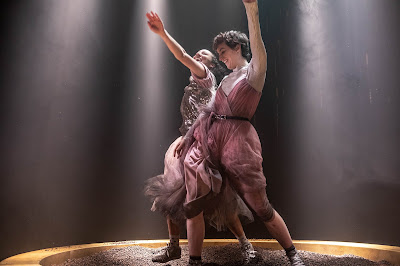 Rachel Hosker and Annabel Baldwin. Photo: Ali Wright
The somber scene is quickly dispelled as the two teenagers start dancing wildly and erotically. The opening dialogue is about having fun, sex (“can you take it hard?), and drinking. The innocent Ismene wants to know “what it’s it like.”

Through the girlish chatter and enthusiasms, the story of Creon, King Oedipus and Jocasta begins to emerge. The girls’ brothers Eteocles and Polyneices who were supposed to rule Thebes in rotation after Oedipus have gone to war because one of them refused to pass the throne to the other when his turn was up. The dethroned brother raised an army and attacked Thebes. Both brothers were killed, and their uncle Creon has taken over.

The war is over now and people are relieved and want to celebrate. But there is some unfinished business. Creon has forbidden anyone from giving the “bad” brother Polyneices who raised an army and attacked Thebes burial or any last rites. The “good” brother Eteocles who fought with Creon is a hero who deserves a military funeral full of honors.

Antigone decides to bury Polyneices despite the clear threat by Creon to kill anyone who does it. The main conflict of the Antigone story is joined as the two sisters argue about the burial. Antigone, as we all know, buries Polyneices simply because everyone deserves a decent burial. We may translate that as a fundamental human right that Ismene simply does not espouse or know anything about.

The sisters go through various permutations of the arguments for and against the “illegal” burial of their brother.

Much of the dialogue consists of short, clipped sentences many having one or two words.  It follows the level of teenagers where the word “like” appears where it has no business to be except in Teengliah. 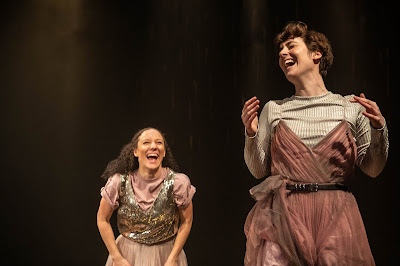 Photo: Ali Wright
The story cannot be told without involving other people. The men in the bar and the involvement of Haemon are dealt by Ismene and Antigone speaking what they would have said.

The play ends with a long and somber speech by Ismene. She tells us the usual highs and lows of human existence from having sex, to picking up men, to marriage, children and friendships. But she cannot get past the fate of Antigone and her own role in it.  She imagines the end of her life and her greatest fear is facing Antigone.

The story of  Antigone’s sacrifice and her disobedience of a human law in obedience to something higher as told by Sophocles is reduced to the language and emotional and intellectual range of two teenagers. Antigone does what she feels is right with perhaps little understanding of why she is doing it.

The most rewarding part of the evening is the superb performances by Baldwin and Hosker. They are on stage for almost an hour and a half in a small circle full of dirt. They have mastered the parts and deliver their lines clearly and sharply. Antigone is the dominant character and Baldwin asserts that dominance well. Hosker as Ismene is the less imposing character who tries to find a solution (and lose her virginity) so that her sister can survive.

It is an interesting take on the Antigone myth.
________
Antigone by Lulu Raczka, directed by Adi Pidsley in a production by Holy What Theatre continues until February 1, 2020 at the New Diorama Theatre, London, England. www.newdiorama.com/whats-on/antigone.
​
James Karas is the Senior Editor - Culture of The Greek Press.