THE TAMING OF THE SHREW – REVIEW OF ROYAL SHAKESPEARE COMPANY PRODUCTION

The Taming of the Shrew is one of Shakespeare’s most challenging plays to produce. It was written in a different age and we make allowances for that. But the mistreatment, abuse, humiliation, debasement and almost dehumanization of a woman is unacceptable in any age.

Directors have tried to find ways around it and some have been more successful than others. Director Justin Audibert has hit on the idea of gender change. The men become women and vice versa. Baptista (Amanda Harris) who has two daughters to marry becomes a mother with two sons, Katherine (Joseph Arkley) and Bianco (James Cooney) to send to the altar.

Bianco’s suitors are Hortensia (Amelia Donkor), Gremia (Sophie Stanton) and Lucentia (Emily Johnstone). Katherine is wooed by Petruchia (Claire Price) and the rest of the male characters including most of the servants become women and the reverse. 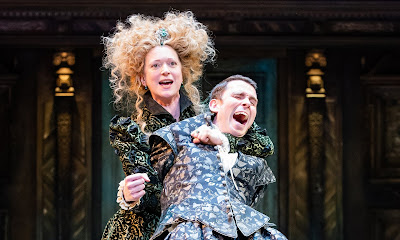 Claire Price as Petruchia and Joseph Arkley as Katherine. Photo: Ikin Yum Photography/RSC
Aside from Petruchio’s treatment of the shrew Katherine as he “tames” her, the play has numerous comic scenes and Audibert exploits them all for laughter. Lucentia changes places with his servant Trania (Laura Elsworthy) in order to pretend that she is a tutor and thus gain access to Bianco. When Lucentia needs her mother Vincentia (Melody Brown) to negotiate the marriage settlement, she gets the merchant Pedant (Hannah Azuonye) to pretend that she is her mother. Then her real mother arrives with hilarious consequences.

The old fool Gremia woos the young Bianco and the clever servants know how to survive their masters in the best tradition of comedy. You should see Sophie Stanton glide across the stage! Audibert has the fine cast do justice to all these complications.

Claire Price with a big orange wig perched on her head looks almost androgynous as Petruchia and once she begins her taming mission is relentless. A domineering and marvellous performance. Arkley’s clean-cut Katherine does not stand a chance against that virago. James Cooney as Bianco looks almost effeminate with his long hair while Emily Johnstone as Lucentia is not to be trifled with.

Richard Clews as Petruchia’s servant Grumio is hilarious as is Amy Trigg as Lucentia’s servant Biondella. Laura Elsworthy as Trania is also up there.

Audibert does away with the induction scene, the framing device using Christopher Sly. It can be put to good use but it can also prove to be a bore. 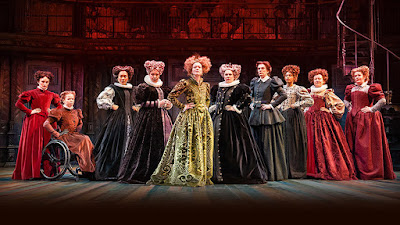 The company of Taming of the Shrew. Photo: Ikin Yum Photography/RSC
The program tells us that the play is set in the 1590s where “society is a matriarchy.” The gorgeous costumes are sixteenth century chic and there is no attempt to allude to current events or attitudes. Hannah Clark gets full marks for the costumes that are a pleasure to watch. Women are the dominant sex, of course. For most of the production this seemed like a pleasant change. We are quite used to hearing about abused women and perhaps some men may be shocked by seeing chauvinist pigs get their comeuppance but it has its fun side.

But it is difficult to swallow the play lock stock and barrel. There is no attempt to lessen the impact of abuse and humiliation meted on Katherine. He just takes it. Some irony, some indication of love to make us aware that there is hope for the couple? Nothing.

Even Katherine’s final speech “Fie, fie! Unknit that threat'ning unkind brow/ And dart not scornful glances from those eyes/ To wound thy lord, thy king, thy governor” is spoken with fervor. There is room for some irony, a gesture, a body movement to tell us that things are not as bad as they seemed but there is none.

Aside from some qualms, this is a well-acted and superbly directed production that provides some unexpected pleasures.
____________
The Taming of the Shrew by William Shakespeare played until January 18, 2020 at the Barbican Theatre, London, England. It now continues its tour in Canterbury, Plymouth, Nottingham, Newcastle and Blackpool on various dates. Full details here:  https://www.rsc.org.uk/whats-on/The Norman Conquests (2013)
Photos by Cylla von Tiedemann


James Karas is the Senior Editor - Culture of The Greek Press