“A horse! a horse! my kingdom for a horse!” is one of the most famous lines in drama. It is uttered by the murderous King Richard III just before he is killed in the dramatic finale of the play. In Shakespeare’s Globe production, Richard III he indeed says these words but at the same time the band starts playing and someone sings “Don’t be so sad.”

During the performance Richard sings several times and I could not imagine why the directors added that gimmick among many others into the production. The irony is that this is a well-acted production that is seriously damaged (I would not say ruined) by all kinds of gimmicks added by directors Sean Holmes and Ilinca Radulian. I imagined them going through the text trying to come up with gimmicks like the singing. 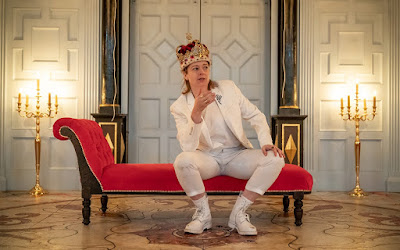 Sophie Russell in Richard III at the Sam Wanamaker Playhouse, London.
Photo: Marc Brenner
In the first scene when Richard speaks the great opening soliloquy “Now is the winter of our discontent” he tells us that he is so deformed that dogs bark at him when he passes by. This Richard, played superbly by Sophie Russell, appears dressed in a dirty football jersey with the number 03 and knee pads. He must have been playing football and he appears youthful and athletic without any deformity. In fact, he is quite attractive. I will refer to “him” and “he” even though he is played by a woman.

There is great latitude in the display of his deformity on stage and we don’t care if it is only mildly indicated to comply with the text and we can take care of the rest. But an athlete with no deformity at all?

There are ten actors in the cast taking on some two dozen roles. They are well-trained and excellent actors. The costumes appear to be modern “wear whatever you want.” Richard does appear in a white suit with a white top hat. He is a singer and entertainer after all. But with some possible exceptions, if there is a dress code it is not obvious. Is the approach “let’s do a good job with the text” (they do) “and forget about the costumes but do a good job on the gimmicks as well”?

The production is minimalist and in the small playing area of the Sam Wanamaker Playhouse it is a sensible approach. When Lady Anne (Matti Houghton who also handles the roles of Lord Gray and Sir William Catesby) appears in the funeral procession of Henry VI there is no coffin but only some of his clothes. It works well as Richard goes through the marvelous seduction scene.  There is no sword for him to attempt suicide and the production uses a plastic bag that he places over his head to indicate his readiness to die. Would not a knife of any size have been more sensible than a plastic bag? 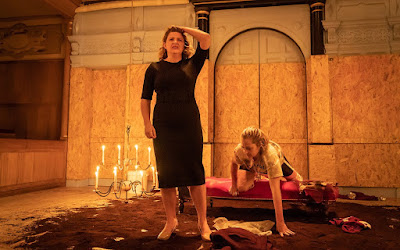 Matti Houghton and Sophie Russell. Photo: Marc Brenner
Jonathan Broadbent plays a devious, ambitious and murderous Duke of Buckingham. When he has succeeded in making Richard a king, he approaches him to claim his gift, the earldom of Hereford. He walks on the stage looking seriously disheveled and I got the impression that he had just slept, as they say, with Richard. Perhaps I misread the scene.

Steffan Donnelly plays Queen Margaret, the First Murderer and Richmond. If you want to hear blood-curdling curses, just listen to Donnelly as the Queen.

Richard III has more than sixty characters but many can be dispensed with and the play tightened up for the better. This was done for the current production and if they had dispensed with the gimmicks it may have been outstanding night at the theatre.
_________
Richard III by William Shakespeare continues until January 26, 2020 at the Sam Wanamaker Playhouse, Shakespeare’s Globe Theatre, The Norman Conquests (2013)
Photos by Cylla von Tiedemann21 New Globe Walk, Bankside,
London SE1 9DT.  Tel: +44 (0)20 7401 9919 https://www.shakespearesglobe.com/