It’s the holiday season including the celebration of a new year, a new decade and a farewell to 2019. How about some light and civilized entertainment?

No, I did not mean that.

I mean something lively, indeed boisterous, civilized, with beautiful music, gorgeous melodies, a visit to another world and, of course, a happy ending. And something you may not have tried for long time. How about an operetta?

Toronto Operetta Theatre delivers a production of The Gypsy Baron by Johann Strauss II that meets all of the above criteria. There are some limitations to what TOT can do but more of that below. In short, this is an enjoyable production with some fine signing by the chorus, superior singing by the women in the key roles and mostly good stuff by the male singers. 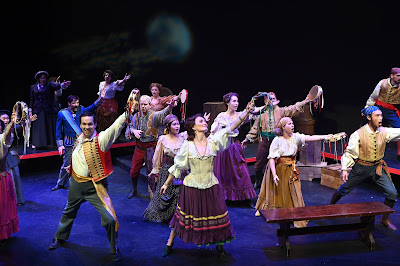 The operetta takes place in Hungary and Vienna sometime in the past – that is another world. Director and Designer Guillermo Silva-Main makes no effort to give us a precise date or century and we do not need it. (There is a number of historical events mentioned that will give you a more precise chronology, but get a life. This is operetta)

The plot involves Barinkay who is returning to claim his father’s estate. He meets Zsupan the crooked pig farmer who has helped himself to parts of his estate but has a pretty daughter named Arsena. Barinkay proposes to her but she rebuffs him because she has eyes only for Ottokar.

In the meantime, Arsena’s governess Mirabella finds her long-lost husband who happens to be the Royal Commissioner Carnero. Barinkay finds the beautiful gypsy girl Saffi who we think is the daughter of the lively, fortune-telling gypsy Czipra but keep an open mind. Complicated, no? Well, the men will go to war, come back heroes and Governor Homonay will drop in near the end to tie up all the plot strands and provide a happy ending for us all.

That is the plot of an operetta. I could not understand all the lyrics as the chorus was singing but they did a marvelous job. You want to hear military music, a waltz, polka, love duets and generally delightful music, Strauss never disappoints. Much of it is quite familiar even if you did not place it the other times that you heard it.

Derek Bate conducted the 12-piece orchestra lined up in front of the stage of the Jane Mallett Theatre. The limitation of the seating area and number of players of the orchestra are obvious. A decent pit and two or three dozen musicians would be preferable, of course. The real delight is how well they played and the marvelous music they gave us.

There is very little in the way of a set. A few chairs and settees, some flowers, are pretty much used for the scene in Vienna. A few platforms are all that you get in the first scenes. The costumes are from Malabar but they are more than adequate for the job. Those are the limitations that TOT has to live with.

The Gypsy Baron provides ample opportunities for comedy, dancing and fine singing. TOT does not have the wherewithal to do all of these things but it does have some excellent singers. Soprano Meghan Lindsay with her plush, mellifluous and simply lovely voice makes a splendid Saffi, the “gypsy” that Barinkay loves. She outsings everyone. 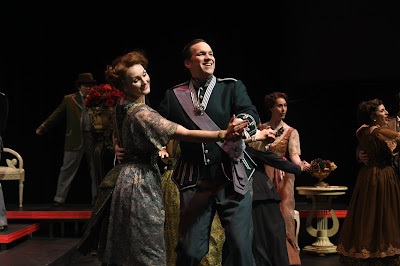 Meghan Lindsay and Michael Barrett. Photo: Gary Beechey
Mezzo soprano Beste Kalender sings a Czipra that is full of voice and life and a delight to hear and watch. Soprano Daniela Agostino is a spunky and well-sung Arsena. Mezzo soprano Karen Bojti sang a spirited and matronly Mirabella, Arsena’s governess.

The male singers were generally not as successful as the women. They had more limited ranges but were quite expressive. Tenor Joshua Clemenger did well singing the pig farmer Zsupan but he missed the opportunity for comic acting. Zsupan could be acted as a broadly comic character. Baritone Austin Larusson was properly wooden as the self-righteous and puritanical protector of morals, Royal Commissioner Carnero.

Tenor Michael Barrett as Barinkay has a big voice with a sturdy midrange but he did not display a huge a range. Edward Larocque as Ottokar has the same issue.
Guillermo Silver-Marin, the company’s General Director and the Stage Director of the production reminds us that TOT is the only professional operetta company in Canada. That’s bad enough but the fact that it is inadequately funded (to put it politely) is a disgrace.
_______________
The Gypsy Baron  by Johann Strauss II is being performed between December 28, 2019 and January 5, 2020 at the Jane Mallett Theatre, St. Lawrence Centre for the Arts, 27 Front Street East, Toronto, Ontario. Tel:  (416) 922-2912. www.torontooperetta.com

James Karas is the Senior Editor - Culture of The Greek Press
Posted by James Karas at 1:37 PM