No, really. The Shaw Festival has a Holiday Season in November/December with two productions: Charles Dickens’ A Christmas Carol and Irving Berlin’s Holiday Inn.

You know all about A Christmas Carol, right? The ghost story about Christmas was published in 1843 and I am not aware of any other work of fiction that has established such a dominant place in the Western imagination. It created such an image of a major Christian holiday as the story of Scrooge that is almost as astounding as the transformation of the skinflint.

The Shaw Festival’s version is an adaptation by its Artistic Director Tim Carroll who directed the original production. This year’s staging is directed by Molly Atkinson and the result is a delight.

The adaptation is faithful to the story but there are a number of Christmas carols sung at the beginning, the end and during the 90-minute performance. The production uses puppets and shadow theatre, and is done on a simple set requiring almost no props except imagination. 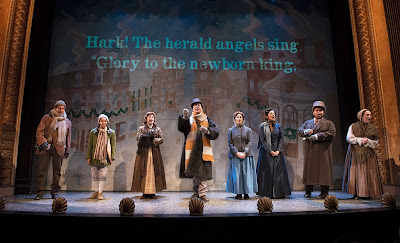 The cast of A Christmas Carol. Photo by Emily Cooper
The performance begins on a bare stage with a painted backdrop showing an advent calendar with a church, some buildings and chimneys. Bob Cratchit (Andrew Lawrie) holds a small board and swings to the right and left to “open” and “close” the door to Scrooge’s business establishment. Another actor places a small board on her head and becomes Scrooge’s desk.

The major prop is a four-poster canopy bed which is highly moveable and has curtains that close it off. It will serve as Scrooge’s bed and proves useful throughout.

The ghost of Marley and the three Spirits are imaginatively constructed and very entertaining. Marley’s ghost is an over-sized, headless man with a hat perched above his shoulders. “He” is operated by a couple of actors from inside his clothes and they speak in unison. 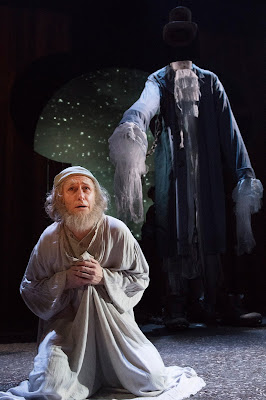 Michael Therriault as Scrooge with the ghost of Jacob Marley in
A Christmas Carol (2017). Photo by David Cooper.
There is liberal use of puppets from Tiny Tim to Scrooge in one of the scenes. There is also a shadow theatre to show us Scrooge’s happy childhood Christmas. There are some ingenious scenes such as having Scrooge’s nephew Fred (Peter Fernandes) and his wife Emily (P J Prudat) wear hats with drinks on top.

Michael Therriault as Scrooge heads the fine cast of ten actors. Patty Jameson plays Mrs. Dilber, Marla McLean plays Mrs. Cratchit and is responsible for movement and is the Puppetry Captain. The cast takes on roles as they are needed and in the end give us a worthy retelling of a marvelous story that has made its mark on western civilization.

The production is colourful, well-paced, enjoyable and perfect for the season.


James Karas is the Senior Editor - Culture of The Greek Press
Posted by James Karas at 10:27 PM