CATS – REVIEW OF GRAND MUSICAL AT PRINCESS OF WALES

Why do you want to see it? Here is a short catalogue of reasons.

You love cats and you want to see them dressed like human beings (or is it the other way around?) sing and dance up a storm.  You are a misanthrope (no that does not make you a fan of Moliere) and you don’t like people on the stage. After The Lion King there are not many choices where this if offered and you go to Cats repeatedly. 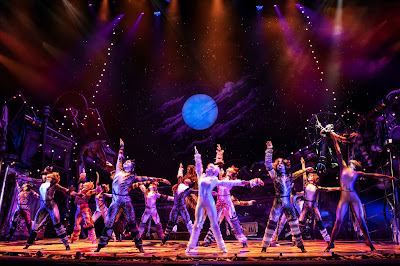 The North American Tour Company of CATS.
Photo by Matthew Murphy 2019
You don’t like cats and go to see Cats to confirm your animosity to the creatures while secretly enjoying a rousing, rip-roaring musical done by humans pretending to be cats.

You want to warm up to T. S Eliot and assuage your guilt and ignorance about poetry. You were traumatized in high school when you tried to figure out how the evening is spread out against the sky like a patient etherized upon a table in The Love Song of J. Alfred Prufrock. You suffered psychological damage leading to post-poetic metaphors syndrome when you found out that The Waste Land is not a John Wayne movie.

Well, with Eliot’s collection of feline poetry, Old Possum’s Book of Practical Cats, you found something readable and very useful to Andrew Lloyd Webber for his lyrics for Cats. Served with music and memorable melodies, the musical lets you kill two cats (sorry, make that metaphors) in one evening. You can sound haughtier than thou in your literary knowledge and musical discrimination.

You find dialogue interferes with the flow of a musical and Lloyd Webber has obliged you with a written-through approach and provided an extraordinarily rich musical score.

You are a dance aficionado and the music with Gillian Lynne’s masterpiece of choreography (with Andy Blankenbueler) is a choreographic, scenic and athletic marvel. She combines ballet, tap dancing, jazz and modern dances in a tour de force of a performing art.

You want a display of splendour, exoticism, glitz, extraordinary energy and sheer magic. Cats presents a kaleidoscope of these with sheer energy. 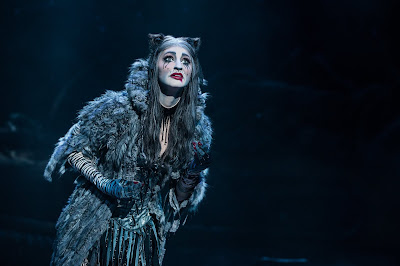 Keri René Fuller as Grizabella. Photo by Matthew Murphy 2019
Your chances, realistically speaking, of convincing St. Peter to open wide the Pearly Gates for you are pretty slim. You are curious about how a tribe of cats chooses one of their group to ascend the upper Heaviside Layer and then return as a new feline. Maybe you can pick up some pointers from the plot of Cats to guide you to a place that has air conditioning, at least.

You don’t like musicals that showcase only “stars” but admire bravura ensemble performances. Cats has a bit of both and a few names from the large cast may be à propos. Keri Rene Fuller as Grizabella, the lady that sings the unforgettable “Memory,” Brandon Michael Lase as the wonderfully-named Old Deuteronomy, Emma Hearn as Bombalurina, McGee Maddox as Rum Tum Tugger and PJ Digaetano as Mistoffelees. “Memory” is the only song sung solo and the rest involve more than one singer or the company. A pleasure to listen to.

James Karas is the Senior Editor - Culture of The Greek Press
Posted by James Karas at 7:36 PM