BETWEEN RIVERSIDE AND CRAZY - REVIEW OF COAL MINE THEATRE PRODUCTION

Coal Mine Theatre is continuing with its judicious and laudable choice of plays. It does not mean you will like all of them but there can be no arguments about the care taken in their choosing. Between Riverside and Crazy by Stephen Adly Guirgis now playing won the 2015 Pulitzer Prize for Drama and that is no doubt an attention grabber.

Between Riverside and Crazy receives a full-blooded and full-throated production directed by Kelli Fox in the small rectangular storefront theatre on Danforth Avenue in Toronto. There are some issues with the play where subplots appear and then are left hanging and unresolved. The end of the play appears rushed to an inexplicable and unexplained resolution as if the playwright looked at his watch and decided to bring in a quick end. 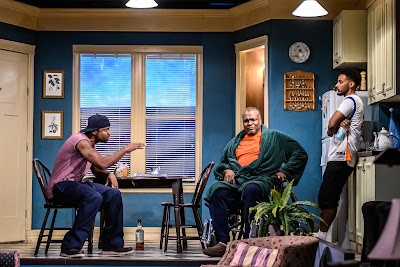 Jai Jai Jones, Alexander Thomas and Nabil Rajo. Photo: Dahlia Katz
Walter “Pops” Washington, played with vigour, passion, zeal and some humanity by Alexander Thomas, is a former New York cop who was accidentally shot six times by a rookie. He wants compensation and has raised the stakes for getting it by stating that he was called a “nigger” by his shooter. It is a lie but he has maintained it for eight years. He has a chequered past which is hinted at with few details provided.

Pops lives with several shady characters in his rent-controlled apartment that he is in danger of losing. His son Junior (Jai Jai Jones) is making a living by other means than working. Oswaldo (Nabil Rajo) refers to Washington as his father (he is not) is on parole but he wants to straighten himself out. Junior’s girlfriend Lulu (Zarrin Darnell-Martin) is physically stunning and she wants us to see it all the time. She is studying accounting (sure) and is pregnant (maybe). Her past is also very shady. We have four social misfits and we wonder if there is a way out for them. And what about the rent-controlled apartment?

That is not all. Washington has a couple of “friends” from the police department and both of them are intense, passionate, loud and almost on the edge of emotional breakdowns. We are not fully certain why. Claire Armstrong as Detective O’Connor and Sergio Di Zio as Lt. Caro play Washington’s friends and pay attention to the $30,000 ring that the lieutenant has given to the detective. They go into emotional high gear very quickly and one is not sure if lower emotional intensity may not be more persuasive. 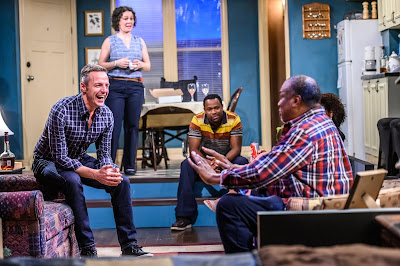 Sergio Di Zio, Claire Armstrong, Jai Jai Jones, Zarrin Darnell-Martin and Alexander Thomas.
Photo: Dahlia Katz
For a good laugh, much mystery and some nefarious activity, Washington is visited by the Church Lady played by Allegra Fulton. She is not so much shady but downright swampy and Fulton makes good work of the role and surprises us more than we anticipate.
The problem with the play is that some of the scenes are overwritten and pass over from dramatic to melodramatic. Some plot strands, as I said, are vague and left hanging but there is not much that Kelli Fox can do about them except to keep up the pace. She does.

The set consists of Washington’s apartment and here designer Anna Treusch attempts to give a representation of it in the small space of the Coalmine Theatre. The kitchen is on a raised area furthest from the audience. There is a living room just below that and a bed closest to audience. Most of the action takes place in the kitchen and relatively little happens in the bed. The design is awkward and one asks if putting the kitchen closest to the audience may not have worked better.
___________
Between Riverside and Crazy by Stephen Adly Guirgis continues until December 22, 2019 at the Coal Mine Theatre, 1454 Danforth Ave. Toronto, M4J 1N4. www.coalminetheatre.com

James Karas is the Senior Editor - Culture of The Greek Press
Posted by James Karas at 11:24 PM