Present Laughter is one of Noe Coward’s best comedies and is centered on the life of a matinee idol, Garry Essendine. He is a supremely successful theatre actor in 1930’s London. Essendine is flamboyant, egocentric, outrageously popular and pursued assiduously by women.  He is partly a self-portrait of Coward but there is a small inaccuracy. Coward was a homosexual and in the original play Essendine is vigorously heterosexual.

Director Matthew Warchus has decided to set the record and the play straight in his production at the Old Vic by revamping the plot and presenting Essendine a practicing homosexual, perhaps bisexual. Needless to say, he takes some liberties with the text to do that. 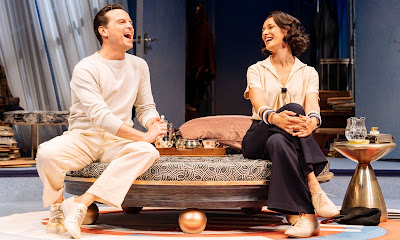 Andrew Scott as Garry Essendine and Indira Varma as Liz Essendine.
Photo: Manuel Harlan
In addition to his household staff, Essendine (Andrew Scott) has a wife, Liz (Indira Varma) from whom he is separated and three friends. His household staff includes Monica Reed, his efficient secretary who has a high human quotient and is played superbly by Sophie Thompson. He also has the amoral butler Fred (Joshua Hill), an eccentric house keeper in Miss Ericson, overplayed by Liza Sadovy who also becomes the even more eccentric and wheel chair-bound Lady Saltburn.

In the original play, Essendine’s friend Joanna is married to Henry, has an affair with Morris and seduces Garry in his posh apartment. She is found in his apartment the morning after the night before to hilarious effect as she tries to conceal what had happened.

In Warchus’s version Joanna (Enzo Cilenti) becomes Joe who is Helen’s (Suzie Toase) partner but is having an affair with Morris (Abdul Salis) and is in love and having an affair with Garry. Warchus does not shy from explicit physical contact between the men and, if nothing else, the play has the authenticity, we presume, it would have had if homosexuality was not only spurned but was a criminal offence when the play was written.

Coward’s homosexuality was known among his friends but he did not dare disclose it openly for good reason. In 1953 the great John Gielgud was convicted of a homosexual encounter in a public washroom. 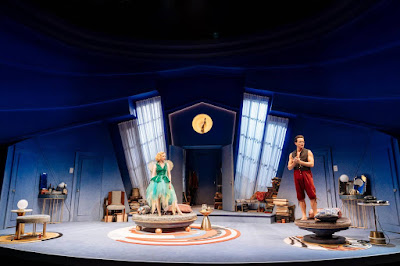 Kitty Archer and Andrew Scott in Present Laughter: Manuel Harlan
Scott as Essendine is expected to be flamboyant and overact. As he himself admits, it is impossible to tell when he is acting and when he is not. The problem with Scott is that he overacts at overacting. Essendine is supposed to be self-conscious about aging and about losing some hair. Scott is muscular (Warchus makes sure we see that), very youthful and certainly not losing any hair.

Many of the characters in the play are in extremis or driven to it by Garry. His wife Liz is calmly and wonderfully funny. Luke Thalion as the lunatic playwright Roland Maule is hilarious and Kitty Archer as the would-be actress Daphne is entertaining.

Present Laughter is a superb light comedy. Changing it into a homosexual one may be of some interest as reflecting Coward’s sexuality but we are not watching a documentary about the author’s life. This is a display of directorial freedom that does not make the play better or funnier. Sometimes leaving what is good enough alone is good enough.
__________
Present Laughter by Noel Coward in a production by the National Theatre played originally at the Old Vic, London and was shown on December 4, 2019 at select Cineplex Cinemas across Canada.  For more information: www.cineplex.com/events
James Karas is the Senior Editor - Culture of The Greek Press
Posted by James Karas at 12:43 AM