If you went to church, specifically to the court chapel of Johann Georg II of Saxony in Dresden, on Christmas day in 1660, you would have found a surprise waiting for you. Instead of the reading from the gospel, you would have been treated to a musical setting of parts of the New Testament by Heinrich Schutz.

Since you obviously did not go to church on that date, The Toronto Consort has decided to give you a Christmas gift, a musical bouquet, by performing Schutz’s Christmas Story and several other musical settings of the Gospels in the Jeanne Lamon Hall of Trinity-St. Paul Centre in Toronto.

The Toronto Consort offers more than the Christmas Story. The concert opens with seven shorter pieces, four by Schutz, two by Johann Herman Schein and one by Hans Hassler. All three were 17th century German composers.

The programme opens with Schutz’s “Lobet den Herrn” (praise ye the Lord) and continues with Schein’s “Verbum caro factum est” (The Word was made flesh). We hear “Quem vidistis pastores” (Whom did you see, shepherds) twice in settings by Hassler and Schein. 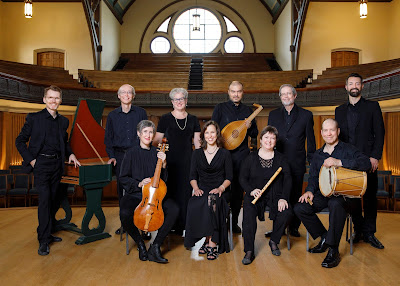 Toronto Consort. Photo: Bruce Zinger
The first half of the programme concludes with the spirited “Alleluja! Lobet den Herren,” a beautiful setting of Psalm 150 by Schutz.

Fallis conducts the Toronto Consort on original instruments that are a delight to hear. He also plays the organ in the Christmas Story.

English Tenor Charles Daniels is the featured artist. He is an expert in baroque music and has an extensive discography. He did most of the singing which consists of biblical passages in recitative.

The Christmas Story consists of an Introduction seven Intermediums (interludes) and a conclusion. After the Introduction of the subject by the chorus (the birth of Jesus as told by the Evangelists) the Evangelist (Daniels) tells the story of the decree of Caesar Augustus that forces the pregnant Mary and Joseph to go to Bethlehem for tax purposes. There is no room at the inn and we know the rest. The recitatives are not particularly taxing and Daniels handles them well.

Soprano Katherine Hill sings the Angel who delivers to the shepherds the good tidings of great joy and informs them of the place of His birth.

The chorus as the multitude of angels sings the beautiful “Glory to God” and the shepherds (members of the chorus, of course) set out for the manger. The Evangelist recites the story of the Magi and they sing and we hear the story of their visit with the nasty King Herod (an impressive Joel Allison).

Schutz includes the story of Joseph and Mary’s escape from Bethlehem before the execution of all the children by Herod.
It was an enjoyable concert of infrequently performed works. The timing could not be better and, under the circumstances, the church setting almost transcendent. There are a few small issues. The chorus did not always enunciate the German lyrics. Enunciating German in the biblical settings may be like having teeth fall out of your mouth but pronunciation was not perfect. The balance between singers and musicians was not always as good as it should be. At times some of the singers were difficult to hear or simply overwhelmed by the instrumentalists. Some ironing out was required in both areas.

The faithful in the court chapel in Dresden in 1660 no doubt expressed their Christian devotion, celebrated the birth of the Nazarene and exalted our Lord Christ who through his birth enlightened us and through his blood redeemed us from the devil’s power. Or so Schutz tells us in the Conclusion of his Christmas Story. I don’t think David Fallis and the Toronto Consort harbored such ambitions for the audience but listening to them in the beautiful setting of Trinity-St. Paul’s was decidedly delightful and uplifting.
_______________
CHRISTMAS STORY by Heinrich Schutz with works by Johann Schein and Hans Hassler was performed December 13, 14 and 15 at Jeanne Lamon Hall, Trinity-St. Paul Centre, Toronto, Ont. www.TorontoConsort.org/
James Karas is the Senior Editor - Culture of The  Greek Press
Posted by James Karas at 5:23 PM