Jumbo is a new play by Sean Dixon that received its world premiere at the Blyth Festival. It tells the story of the wildly famous, 19th century elephant that became a circus star and gained immortality in its death near St. Thomas, Ontario in 1885 when it was hit by a freight train.

Is there enough material in that for a stage play? Perhaps. Perhaps not.

Jumbo had several events in its life that are worthy of mention. It was a star of the London Zoo in England and was bought by P.T. Barnum for his circus and became an even greater star in North America. Signs with the names of cities are placed on both sides of the stage informing us of Jumbo’s itinerary in the United States and Canada. 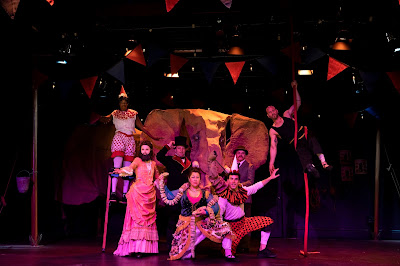 Pictured are (left to right): Tiffany Claire Martin, Lucy Meanwell, Gil Garratt,
Julie Tamiko Manning, Tony Munch, Kurtis Leon Baker and Mark Segal. Photo by Terry Manzo.
We do see a large puppet manipulated by several actors to represent the hapless Jumbo but this production is no War Horse. That limits severely what can be done with him so Dixon provides us with a mini circus in the first act. We get an aerialist, a monocyclist, a couple of clowns and some other circus performers who try hard and may even be credited with being good.

There are even some freaks that used to “entertain” people such as the bearded lady Annie Jones (Lucy Meanwell), the armless man and a snake charmer. But we did not come to the circus. We came to the theatre.

We do meet P.T. Barnum (Don Nicholson) who also acts as a very lackluster circus crier and shows little of the grandiosity and ego of the great entertainer that looms large in the imagination.

The second act takes place after poor Jumbo is killed and deals sentimentally with what should happen with his remains. The Butcher (Mark Segal) and his son (Kurtis Leon Baker) are ready to make hamburgers out of him. The no-nonsense taxidermist Henrietta Ward (Tiffany Martin) wants him stuffed and saved for posterity in all his huge glory. His trainer and man of decency, Matthew Scott (Tony Munch), wants a monument built for his beloved charge.

Barnum wants a big story. I am sure he got it and it resonated with many people for many reasons. Unfortunately that reaction is not is not well communicated to the theatre audience. Much of the action looks like padding to fill a couple of hours.

There may be animal lovers who will appreciate the fame and fate of the huge elephant. That type of audience seemed absent during the performance that I attended. The theatre was less than one-third full and the reaction was at best muted.

James Karas is the Senior Editor - Culture of The Greek Press. www.greekpress.ca
Posted by James Karas at 10:59 PM