Seeing a good production of Arthur Miller’s The Crucible is like receiving a powerful and unexpected punch in the face. It leaves you stunned, dazed, breathless, furious and wondering in disbelief how it could have happened.

The witch trials of 1692 in Salem did happen and people were tortured and hanged by judges who ardently believed that they were doing the work of God in the fight against witches possessed by the devil.

Jonathan Goad directs a production that takes unerring aim at your face and delivers an unforgettable punch. He works with a cast that can deliver all the brutality, fanaticism, self-righteousness, arrogance, terror, tragedy and the small centre of decency to give us an unforgettable night at the theatre. 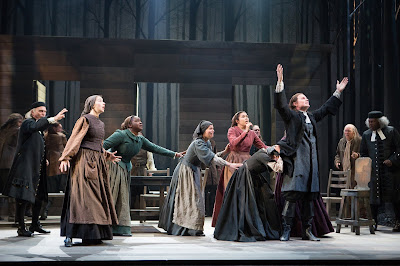 Members of the company in The Crucible. Photography by Cylla von Tiedemann.
In a strict, Puritan village, girls are found dancing in the forest. They must have been conjuring spirits or they are possessed by the devil. Hysteria takes over most villagers like a raging disease and the “experts” are called to find the witches and punish them. It may be hard for us to conceive of the evil unleashed by searching imaginary powers that possess people, but a hard look at the activities of the House Un-American Activities Committee (HUAC) and Senator Joseph McCarthy’s hearings may fill you in. It was one of many witch-hunts, lest we take comfort in thinking they are rare occurrences.

The protagonist of The Crucible is a farmer named John Proctor and Tim Campbell turns in a magnificent performance in the role. This Proctor is big and muscular with a booming voice and he tries to negotiate life within the strictures of the Puritan ethic around him and maintain his right to make up his own mind and protect his dignity. He has committed a sin that his wife Elizabeth (Shannon Taylor) attributes to her coldness. In the end Campbell raises Proctor to heroic stature.

Scott Wentworth as Reverend Parris is a small, grasping, evil man who craves respect and control of the people but gets very little of either and deserves none.

The more interesting character is Reverend Hale played with compassion and conviction by Rylan Wilkie. He is a young intellectual who has no doubt about the existence of witches or his ability to ferret them out. His humanity makes him realize that the arrests and trials of the farmers of Salem is a fraud. A marvelous portrayal by Wilkie.

The most frightful and powerful person is Deputy Governor Danforth played by Wayne Best. Best as Danforth has a piercing, clarion voice, an arrogant manner, a bullying style and a contemptuous attitude towards people. He believes ardently that he is doing the work of God and the idea that he is doing great evil would never occur to him. Best gives us a superb and frightful portrait of a purveyor of evil who is deluded into thinking he is a paragon of virtue. 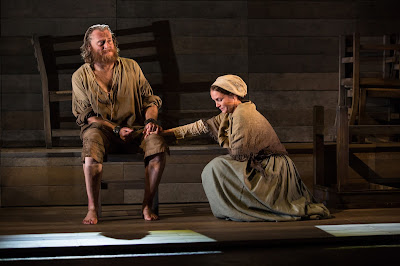 Tim Campbell as John Proctor and Shannon Taylor as Elizabeth Proctor in The Crucible.
Photography by Cylla von Tiedemann.
The centre of decency and common sense is held by Rebecca Nurse. A fine performance by Maria Vacratsis whose Rebecca represents a hopeless oasis in the midst of hysterical evil and injustice.

The hysteria of the girls is quite frightful and convincing. The screams, the contortions, the choreography of their actions are superb. I will give their names and kudos for fine acting to the actors. Ijeoma Emesowum is Tituba, Aviva Goad is Betty, Katelyn McCulloch is the ring leader as the vengeful Abigail, Déjah Dixon-Green is Susanna, and Mamie Zwettler is Mary Warren.

The cast of twenty-two is an amazing ensemble that give exceptional performances.

The set by Michael Gianfrancesco consists of a plain, dark paneled wall with some tables and chairs except for the opening scene where there is a bed. It is simple and does the job.

A great night at the theatre. Not to be missed.
_____
The Crucible by Arthur Miller opened on August 1 and will continue in repertory until October 25, 2019 at the Avon Theatre, 99 Downie Street, Stratford, ON N5A 1X2. www.stratfordfestival.ca

James Karas is the Senior Editor – Culture of The Greek Press. www.greekpess.ca