That is a decent collection of adjectives to describe the production of The Front Page directed by Graham Abbey at the Stratford Festival.

The Front Page by Ben Hecht and Charles MacArthur premiered exactly 91 years ago in New York and has been produced regularly ever since. It has been made into several films and it is a classic in its genre provided you can decide in which pigeon hole it belongs. Let us agree that it is a very funny play.

The Stratford Festival production is an adaptation by Michael Healy and he changes the sex of one of the main characters, adds a couple of characters, some political humour, some great zingers and generally makes it even funnier than the original. The major contributor to the extraordinary production is without a doubt director Graham Abbey. The first line of this review applies to his contribution to the production and it cannot be overestimated. 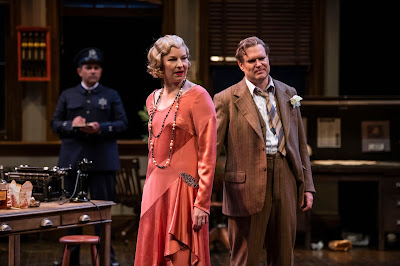 Maev Beaty as Penelope Burns and Ben Carlson as Hildy Johnson
in The Front Page. Photography by Emily Cooper.
The play deals with a bunch of rough-hewn newspaper reporters in the Chicago Criminal Court building in 1927 who are covering the execution of a schmuck who killed a black policeman.    The execution is scheduled for the early morning and the card-playing, booze-drinking and lying reporters who make up stories when the facts don’t fit or simply do not exist have no choice but to wait.

The central plot involving the reporters is Hildy Johnson’s (Ben Carlson) desire to get out of the business and marry Peggy (Amanda Sargisson). His boss, Mrs. Burns (Maev Beaty) does not want him to leave because there is a great story to be covered and he is a damn good reporter. She will use her wiles, ethical or not, to prevent the marriage. Healy’s change is to make Mrs. Burns inheritor of the paper from her husband Walter Burns, the original character in the play.

This is Chicago in the 1920’s and there is ample corruption to uncover. The Mayor is up for reelection and he wants the execution to proceed because it will guarantee him votes. The execution of a white killer of a black cop is a surefire vote getter of the blacks. The Sheriff (Mike Shara) is an idiot and a corrupt one at that. 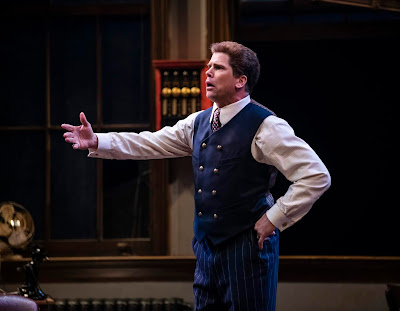 Mike Shara as Sheriff Hartman in The Front Page. Photography by Emily Cooper.
The prisoner escapes using the sheriff’s gun and hides in the reporters’ office. A reprieve from the governor arrives that the sheriff and mayor want concealed. Hildy’s officious and prospective mother-in-law (Rosemary Dunsmore) barges in, his distraught would-be wife arrives, Mrs. Burns tries to avert the marriage and all hell breaks loose. The audience is in stitches with laughter.

Director Graham Abbey has an outstanding cast but he deserves credit for the overall success of the production. He handles every scene, every situation and every character carefully, attentively and imaginatively to bring out all the humour and laughter that is available. A minor character like Woodenshoes Eichorn (Josue Laboucane) who believes he can tell the character of people by the shape of their heads does not fail to get a good laugh at every appearance. Laboucane goes a long away with a minor role.

Mike Shara as the Sheriff becomes a comic genius with his verbal delivery, his physical actions and his reactions. This may well be Shara’s best performance. The same may be said of Juan Chioran as the Mayor. Rosemary Dunsmore as Mrs. Grant is a relatively minor character but she and Abbey make sure she is a hilarious one. Ditto for Farhang Ghajar as the messenger Irving Pincus.

The major characters receive the same attention and produce the same results. Ben Carlson is masterful actor and hilarious as Hildy Johnson, Maev Beaty may be a bit overdone as Mrs. Burns but in the buildup of laughter and energy, she is a major contributor.

The large cast makes it difficult to compliment all of them but suffice to say that they do marvelous work including a natural comic like Randy Hughson as Fife and Michael Spencer-Davis as the eccentric fool Bensinger.

The set by Lorenzo Savoini consists of a large, shabby office with desks, chairs and telephones for the colourful reporters. It is perfect for the job.
_________________
The Front Page by Ben Hecht and Charles MacArthur, adapted by Michael Healy, opened on August 15 and will play in repertory until October 25, 2019 at the Festival Theatre, Stratford, Ontario. www.stratfordfestival.ca


James Karas is the Senior Editor – Culture of The Greek Press. www.greekpess.ca