Show Boat is a grand musical in the old style. It has a large cast, features some marvelous dance routines, a few great songs and touches on some societal issues. It is also sentimental, sometimes corny with a few too many coincidences but in the end it leaves you highly entertained and satisfied. And that describes the Glimmerglass Festival’s gorgeously sung and beautifully designed production directed by the highly capable Francesca Zambello.

Show Boat equals the great aria “Ol’ Man River,” a personification of the grand Mississippi River that "jes' keeps rollin' along". “Ol’ Man River” equals the unequalled voice of Paul Robeson. In this production Justin Hopkins as Joe does justice to the song with his great midrange and wonderful rumbling low notes. 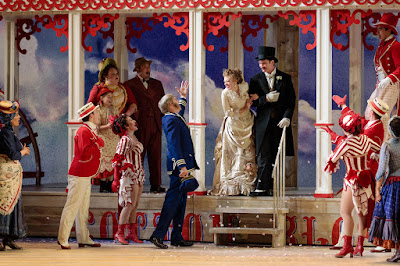 Lauren Snouffer as Magnolia Hawks, Michael Adams as Gaylord Ravenal
and members of the ensemble. Photo Credit: Karli Cadel/The Glimmerglass Festival
But there is more to Show Boat than one great song. Jerome Kern married Oscar Hammerstein II’s lyrics based on Edna Ferber’s novel and produced one of the landmarks in American musical theatre. The integration of plot and music, the subject matter which includes miscegenation and the overall quality of the show have made a milestone that is frequently revived since its premiere in 1927.

The Cotton Blossom is a floating theatre that travels along the Mississippi. The musical starts with a fistfight where the star of the show Steve (Charles H. Eaton) knocks out Pete the engineer (Maxwell Levy) for making passes at his wife Julie (Alyson Cambridge). The crux of the incident is to bring into focus one of the most disgraceful chapters in endemic American racism: the criminal prohibition of interracial marriage and sex. Julie has Negro blood and that makes her marriage to Steve a crime. Before the sheriff can arrest her, Steve cuts her hand and sucks some of her blood. Thus he can prove that he has Negro blood as well and their marriage is legal!

This is a minor but striking incident in the musical. We then get on with the main plotline which is the relationship between Magnolia (Lauren Snouffer) and the debonair gambler Gaylord Ravenal (Michael Adams). He is tall, dark and handsome, as they say, and she is blonde and pretty. He sings "Where's the Mate for Me?" and they both sing “Make Believe” and its love forever. Snouffer and Adams turn in superb performances.

They marry, have a child and do well until Ravenal returns to gambling, loses everything and disappears for a couple of decades. She hits bottom and rises to the top on Broadway and loves Ravenal forever.

Magnolia’s father, Cap’n Andy is overplayed by Lara Teeter who tries a bit too hard to be funny. His wife Parthy a.k.a. Parthenia (played by Klea Blackhurst) is a termagant and her name gives away her character. She is right about Ravenal but we prefer Andy’s judgment because we do not want to interfere with the course of love especially in a musical. 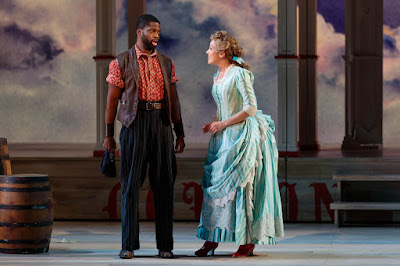 Justin Hopkins as Joe and Lauren Snouffer as Magnolia Hawks.
Photo Credit: Karli Cadel/The Glimmerglass Festival
The musical covers some 40 years from 1887 to 1927 and by the end Magnolia’s and Ravenal’s daughter Kim (Hayley Ayers) is grown up. Andy arranges for a reunion on the Cotton Blossom. Kim rushes into her father’s arms but Zambello, quite smartly, does not have Magnolia do the same. It may be a musical but reality has not been abrogated.

Show Boat has a chorus of stevedores and working girls who perform a number of songs and brilliant dances choreographed by Eric Sean Fogel.

The sets by Peter J. Davison from the brilliantly coloured show boat to the gritty harbour to the posh hotel and Trocadero are superb.

The Glimmerglass Festival Orchestra is conducted by James Lowe.

The Mississippi may be eternally rolling along oblivious to the affairs of humanity but humanity, especially the audience in The Alice Busch Opera Theatre was certainly not oblivious to “Ol’ Man River” or this production of Show Boat as marked by their standing ovation.
_________
Show Boat by Jerome Kern (music) and Oscar Hammerstein II (book and lyrics) is being performed thirteen times between July 6 and August 24, 2019 at the Alice Busch Opera Theater, Cooperstown, New York. Tickets and information (607) 547-0700 or www.glimmerglass.org


James Karas is the Senior Editor - Culture of  The Greek Press. www.greekpress.ca
Posted by James Karas at 2:29 AM