Yasmina Reza’s play ‘Art’ can appear thin, pretentious and without enough material to entertain one for even ninety minutes. It is nothing of the kind. It is a three-hander done on a simple set with three friends purportedly looking at a painting but in fact analyzing the basis of their friendship. It works.

Serge (Diego Matamoros), a dermatologist, has bought a modern painting by a famous artist for a lot of money. It is a 5’ x 4’ white canvas which may have some intriguing lines on it. Serge is ecstatic about the piece that he has acquired and considers it a masterpiece that fascinates and moves him. 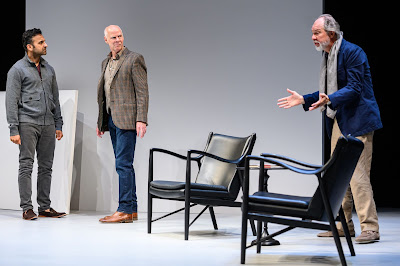 Huse Madhavji, Oliver Dennis, and Diego Matamoros. Photo: Dahlia Katz.
His best friend Marc (Oliver Dennis), a self-assured aeronautical engineer has an immediate and definite reaction to the painting. It is shit. Serge’s other friend Yvan (Huse Madhajvi) lacks Marc’s education and character (he just got a job selling stationery) agrees with Marc and with Serge. He is a wishy-washy, self-centered and a rather pathetic character who does not want to displease anyone.

The reaction to the painting sets off a series of revelations not so much about art as about the characters of the three men and the basis and nature of friendship itself. On what basis do they get along?

Is the friendship between Marc and Serge based on the engineer dominating the dermatologist and being his mentor and the shaper of his tastes? Serge holds Marc’s wife in contempt and considers her a perfect match for Marc. In other words Marc is contemptible like his wife?

Yvan is about to be married and he has trouble with his mother and stepmother and the whole world it seems. He is called a spineless amoeba and a coward who cries very easily.  He has a job in a company owned by his fiancée and has nowhere to go. His friends advise him to cancel the marriage. He infuriates Marc and Serge by being habitually late. What kind of friend is he?

One’s taste in art may be completely subjective and one’s masterpiece may appear like crap to someone else. Friendship may be just as subjective and putting it under the microscope may reveal nothing. A friend is a friend and you should gladly leave it at that. No? 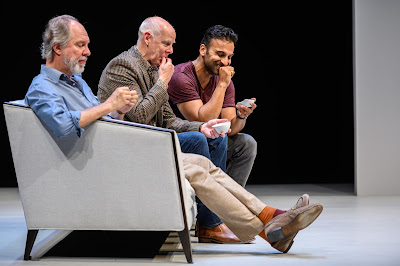 Diego Matamoros, Oliver Dennis, Huse Madhavji. Photo: Dahlia Katz.
The play contains a great deal of humour that Dennis, Matamoros and Madhajvi bring out with expertize and panache. They also handle the dramatic scenes in performances that deserve nothing but praise. Madhajvi gets a lengthy and dramatic monologue that he delivers brilliantly. It is dramatic for the character and hilarious for the audience.

High marks for director Philip Akin who has the tough job of modulating the emotional and physical pace of the play. He maintains a perfect pace and makes sure the audience is not left without laughter for long.

The set by Gillian Gallow suggests three almost identical, simple but classy apartments that have a couple of chairs and a couch with a large white panel as a backdrops. The three different occupants are indicated by the painting hanging on the backdrop.

A superb production of an amazing, intelligent and funny play.
______
‘Art’  by Yasmina Reza  opened on August 15 and will play until September 1, 2019 at the Young Centre for the Performing Arts, 55 Tank House Lane, Toronto, Ontario. www.soulpepper.ca

James Karas is the Senior Editor - Culture of The Greek Press. www.greekpress.ca
Posted by James Karas at 4:49 AM