THE GHOSTS OF VERSAILLES – REVIEW OF 2019 GLIMMERGLASS FESTIVAL PRODUCTION

The Ghosts of Versailles is a big opera by composer John Corigliano with a libretto by William M. Hoffman. It was commissioned in 1979 by New York’s Metropolitan Opera and premiered in 1991. It is a highly ambitious work with a complicated plot, a large cast and huge production demands for cast, costumes and scenery.

It is partly based on Beaumarchais’ third Figaro play The Guilty Mother with significant additions by Hoffman. The servants Figaro and his wife Suzanna, Count Almaviva and the Countess Rosina from The Barber of Seville and The Marriage of Figaro as well as Cherubino from the latter opera appear as do a host of other characters. I count 31 roles in the program plus dancers. 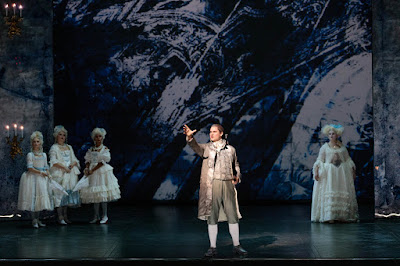 (Center) Jonathan Bryan as Beaumarchais and members of the ensemble.
Photo: Karli Cadel/The Glimmerglass Festival
The ghosts are members of the French royal family with Queen Marie Antoinette and King Louis XVI being the most important ones. Beaumarchais plays a key role because his ghost is in love with Marie Antoinette’s ghost and he has written an opera that will change history. The characters from The Marriage of Figaro mentioned above and a few others will appear in the opera. The complications and turns of events are very numerous and not very exciting to be recited in a review. Let’s just say the complicated plot adds nothing to the opera.

Let’s give credit to the creators of the production starting with Director Jay Lesenger who handles the large cast, numerous scene changes, entrances and exits with aplomb. James Noone’s sets are visually stunning. Nancy Leary’s costumes take us back to 18th century grace and splendour that only massive wealth could have produced then and no doubt do not come cheaply today but that is irrelevant to the splendour they add to the production. No one can take issue with the production values that the Glimmerglass Festival has marshalled for this opera.

I did not like the rest of the production at all. Corigliano’s modern music sounded jarring, dissonant and frequently unpleasant. There are some arias, duets and quartets that were almost melodic but they were some distance from being completely enjoyable. I realize and admit that Mozart’s music kept playing in my head. I appreciate the unfairness in hearing other music instead of what is played in front of me but so be it. At one point Rosina, the unhappy wife of Count Almaviva, sings an aria expressing her misery and seeking the lost years of her youth. That is similar to “Dove sono” from The Marriage of Figaro where the Countess seeks the pleasant past. Corigliano’s music sounded jarring compared to the sumptuous beauty of Mozart. Unfair comparison? Perhaps.

The Ghosts takes potshots at comic opera and there are few laughs in it. Beaumarchais wants to free Marie Antoinette from her present condition – remember she was beheaded and is now a ghost - change the course of history and enjoy life with her in Philadelphia – “if you can call that life!” is the last comment on the suggestion We have a sword fight only to discover you cannot stab to death someone who is already dead. 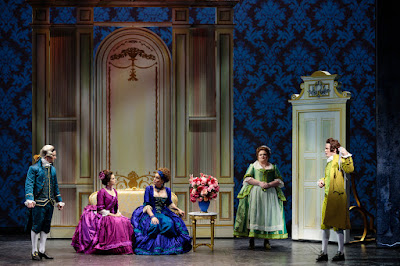 (From left) Brian Wallin as Count Almaviva, Emily Mirsch as Florestine,
Joanna Latini as Rosina, Kayla Siembieda as Susanna, and Ben Schaefer
as Figaro. Photo: Karli Cadel/The Glimmerglass Festival
There is a great party at the Turkish embassy which goes on for too long and ceases being amusing long before it is over. Lesenger makes generous use of the aisles of the theatre and you see French royalty walking by you. At one point one of the cast mumbles the comment “is this thing still going on? It is so boring” or words to that effect.

Let’s give credit to the cast who work hard and I do not hesitate to express my adulation for their work. Of the ghosts, the main ones are Yelena Dyachek as Marie Antoinette, Jonathan Bryan as Beaumarchais, Peter Morgan as Louis XVI and Zachary Rioux as the Marquis.

With the exception of Dyachek, the entire cast are members of the Young Artists Program.

There are aspects of The Ghosts of Versailles that people find entertaining, admirable and even wonderful. I find myself on the side of those who did not enjoy the opera at all.
_______________
The Ghosts of Versailles by John Corigliano (music) and William H. Hoffman (libretto) is being performed eight times between July 13 and August 23, 2019 at the Alice Busch Opera Theater, Cooperstown, New York. Tickets and information (607) 547-0700 or www.glimmerglass.org