IN THE WAKE OF WETTLAUFER – REVIEW OF 2019 BLYTH FESTIVAL PRODUCTION

The Blyth Festival has produced a harrowing and deeply moving play about the fate of a man suffering from dementia and its effects on his family. The man, Frank, died in a nursing home under circumstances that led his children to suspect that he was murdered by serial killer Elizabeth Wettlaufer. Frank and his family are a fictitious creation by Kelly McIntosh and Gil Garratt but as the title In the Wake of Wettlaufer suggests it is clearly rooted in the murders of Wettlaufer and the subsequent inquiry.

Between 2007 and 2016, Elizabeth Wettlaufer murdered eight seniors and attempted to murder another four victims. She confessed to the murders and is now serving several life sentences in a penitentiary with no eligibility for parole for 25 years. Details of her conduct and the inquiry held by Justice Eileen Gillese are easily accessible on the internet.

Subject to some comments at the end of my review, here, we are concerned with the play In the Wake of Wettlaufer and the extraordinary production it receives at the Blyth Festival. 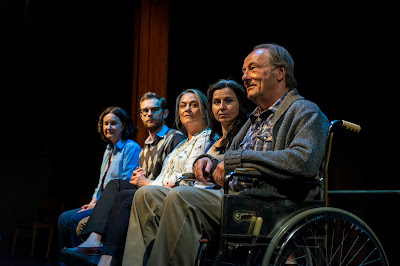 The cast of In the Wake of Wettlaufer. Photo by Terry Manzo.
Frank (Robert King) is, one would say, staring to lose it. He is confused, forgets things and shows some excessive mood changes. He is in denial but his daughter Lynn (Rachel Jones) takes him in for an assessment and he is diagnosed with the dreaded Alzheimer’s disease.

His four children, Lynn, Mary (Jane Spidell), Brenda (Caroline Gillis) and John (Nathan Howe) argue passionately and at times viciously about how their father should be cared for. He deteriorates to the point where he does not recognize his children, hallucinates and goes through violent mood changes. Frank’s children with the exception of Lynn live far away. Lynn as the primary care giver wants him to stay at home. The others want him to be put in an institution. When Frank dies, Lynn blames the others for insisting that their father be placed in a nursing home.

King gives a stunning performance as Frank. We see a man deteriorating mentally and physically, trying to deny the obvious until he becomes a cipher of his former self. It is a dreadful sight.

As Frank deteriorates so does the relationship among his children. There is anger, guilt, recrimination and at times generosity and love as they try to come to terms with their father’s condition and subsequent death. They also share beautiful memories of their happy childhood. Brenda is a nurse in the armed forces and is devastated by her father’s death. Mary seems to be the strongest of them and finds a way to reward Lynn for her work. John and Lynn grow to hate each other unforgivably and seem unable to call a truce let alone reconcile.

The set by co-author Gil Garratt consists of no more than some tables and a few chairs and that is all that is needed for this powerful play and impeccable production.

Gil Garratt also directs the play unerringly as it builds towards the emotionally horrific climax and then works towards a calmer finish. Superb work.

Frank’s children, like the relatives of all of Wettlaufer’s victims, search for an answer to their father’s death but there is nothing coming. Justice Eileen Gillese who held an extensive inquiry found no misconduct by any one and simply blamed the system. Really? The system was created by people. Are none of them to blame?

There were more than 300 complaints against Wettlaufer. She was terminated more than once but the termination was changed to resignation with severance pay and a letter of recommendation. The HR people, managers and the Registered Nurses Association of Ontario (RNAO) do they bear no blame for the travesty of closing their eyes and passing her on to another institution? Does the RNAO bear no blame or even an iota of criticism for defending her to the hilt? Is there no moral responsibility attaching to anyone for their actions that resulted in the horrible deaths of people?

Justice Gillese lets everyone off the hook because “no one in the long-term care system conceived of the possibility that a healthcare provider might intentionally harm those within their care and, consequently, no one looked for this or took steps to guard against it.” What did they expect when they lied about her dismissal, recommended her to other institutions and turned a blind eye to her performance? Did the RNAO not conceive that this nurse was simply incompetent and that should have been enough to get her out of the profession. Did they have to conceive that she was a murderer?

I digress too much.

James Karas is the Senior Editor – Culture of The Greek Press. www.greekpess.ca