THE TEAM ON THE HILL – REVIEW OF 2019 BLYTH FESTIVAL PRODUCTION

If you want to enjoy bursts of heart-felt laughter all you have to do is go to the Blyth Festival and see The Team on the Hill.  It is a hilarious and touching comedy by Dan Needles, the Canadian humour writer who gave us Walt Wingfield. Like the fictional Wingfield, Needles quit his office job and moved to a farm in 1987 and has been writing about life in rural Ontario ever since. He is the worthy successor of Stephen Leacock.

The Team on the Hill is about the Ransiers, a farming family that is facing a changing world in the 1970’s. Old man Austin (Layne Coleman) is running the farm with his son Ray (Tony Munch) and Ray’s wife Irene (Julie Tamiko Manning). Ray’s son Larry (Kurtis Leon Baker) arrives fresh from Agricultural College with his girlfriend Leanne (Lucy Meanwell) and the battle lines for disagreement among the generations are drawn.

Larry wants to plant soybeans, a revolutionary idea that Ray opposes. Do they sell the farm to a developer who wants to convert it into a golf course? Would Larry be better off getting a job instead of trying to survive as a farmer? Will he ask the lovely Leanne to marry him and does she want to marry him? And why can’t the men discuss anything without flying off the handle? 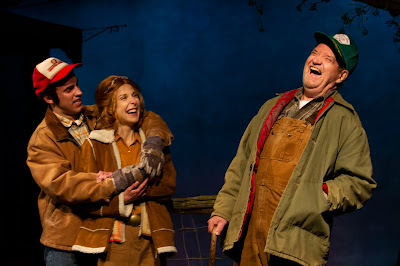 Larry (Kurtis Leon Baker), Leanne (Lucy Meanwell) and
Austin (Layne Coleman). Photo by Terry Manzo
Much of the comedy and the biggest bursts of laughter belong to Coleman as Austin. He is a crotchety old man whose mental and physical faculties, to put it politely, are showing considerable deterioration. Needles gives Austin the best lines in the play and Coleman delivers them with unerring aim. My only complaint is that he does not wait for the laughter to subside and continues with his next line which is occasionally drowned out by the laughter.

The rest of the cast does a good job but there is no doubt about who dominates the production. Leon Baker is the intense young man who looks to the future but wants to continue in the family farming business. We like Meanwell’s Leanne who is not just head-over-heels in love but wants assurances about her future. Nicely done with humour and compassion.

Munch’s Ray is a seasoned farmer who needs to adjust to change and to inevitable succession. He married Irene six days after they met and we are on their side as we want them to see the future.

Kelly Wolf has designed a simple set representing the porch of the farmhouse with a view of the interior. There is a large tree on the left. The house revolves to take us to a hospital room after Austin collapses and the town fair. Very well done.

Severn Thompson, the Associate Director of the Blyth Festival and director of The Team, does splendid work in bringing out Needles’ comedy and keeping the audience enthralled. The small complaint about having the actors waiting for the laughter to abate before continuing with their lines and the occasional blip in failing to enunciate are easily correctable.

As you drive to Blyth you go by farms that are planted with corn, soybeans, hay and other crops as far as the eye can see. It is an enchanting sight. The Team on the Hill is the perfect play for the Festival in its setting and humour. The play was first produced by Theatre Orangeville in 2013 and one can only applaud the Blyth Festival for bringing it back to the delight of a packed theatre.
_________
The Team on the Hill by Dan Needles continues until September 5, 2019 at the Blyth Memorial Hall, Blyth, Ontario, blythfestival.com

James Karas is the Senior Editor - Culture of The Greek Press. www.greekpress.ca
Posted by James Karas at 11:07 AM