La Traviata is the chestnut opera at the Glimmerglass Festival this year and Francesca Zambello delivers a stunning production. It is vocally and scenically splendid and shows original thinking by Zambello.

This Traviata opens in a palliative ward of a hospital. During the overture, one woman dies and another is being comforted by a visitor and appears to be on the verge of dying. As the overture ends, she gets out of bed and tosses her hospital gown away showing that she is dressed for a party. The lights and the background change, the hospital furniture is quickly removed and we are in Violetta’s sumptuous apartment where an elegant party is in progress. 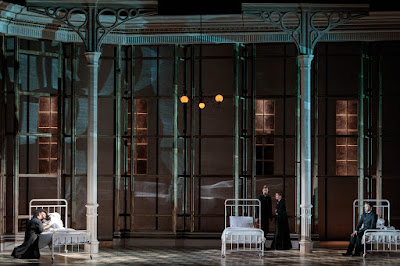 (From left) Kang Wang as Alfredo, Amanda Woodbury as Violetta, Wm. Clay Thompson as
Doctor Grenvil, Bryn Holdsworth as Annina and Adrian Timpau as Germont.
Photo: Karli Cadel/The Glimmerglass Festival
Violetta may be suffering from consumption but she still has the strength to sing, fall in love, sacrifice all and in the hands of soprano Amanda Woodbury give an outstanding performance. The young soprano has a clarion voice that she uses with assurance and shows superb virtuosity throughout her performance.

She falls deliciously in love with Alfredo Germont, shows nobility in her encounter with his father and is extraordinarily moving during her death scene. A signature performance.

Tenor Kang Wang sings a terrific Alfredo. He starts reluctantly when asked to make a toast with “Libiamo” and then unleashes his considerable vocal power. Conductor Joseph Colaneri does not rush him through his arias but lets him (and us) relish his marvelous midrange and ascend to his high notes with ease.

Baritone Adrian Timpau sings the role of Giorgio Germont, the father of Alfredo, who initially looks with contempt at Violetta but gains an understanding of her honorable nature and we realize that he is a man of compassion and decency. The young baritone has a commanding stage presence as he tries to convince Violetta to give up the man she loves. His commanding and resonant voice go well with his mission and we get a stellar performance. I need hardly add that he excels in the delivery of the great “Di Provenza il mar” aria that everyone anticipates to bring the house down.

The rest of the relatively minor roles are handled very well by members of the Glimmerglass’s Young Artists Program. Joseph Colaneri conducts The Glimmerglass Festival Orchestra and Chorus in flawless performances. 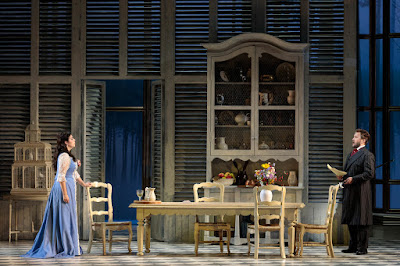 Peter J. Davison’s set designs are fluid and effective. The scene in Violetta’s apartment, as I said, appears posh and there are dining tables. All is moved out quickly for the rural scene outside Paris. In case someone did not get the message, a hunting dog comes on stage (and takes a tail wag at the end to tumultuous applause). Lighting changes, furniture re-arrangement and a gambling table give us the penultimate scene until we return to the hospital.

Having Violetta on her death bed in the opening scene was tried by Michael Mayer in last year’s production at the Metropolitan Opera in New York. Mayer had a few other ideas up his sleeve and the production got mixed reviews. Zambello’s idea is more refined and works much better. She does not add characters to the opera as did Mayer and showing Violetta in the hospital in the opening scene and at the end is effective and extremely moving.

An extraordinary production.
_________
La Traviata by Giuseppe Verdi is being performed twelve times between July 7 and August 24, 2019 at the Alice Busch Opera Theater, Cooperstown, New York. Tickets and information (607) 547-0700 or www.glimmerglass.org

James Karas is the Senior Editor - Culture of The Greek Press. www.greekpress.ca
Posted by James Karas at 1:31 AM