The Glimmerglass Festival is in its 45th season on the shores of Lake Otsego and, yes, near Cooperstown. The village lays claim to fame for opera, of course, the Fenimore Art Museum, The Farmers’ Museum, and The Fly Creek Cider Mill and Orchard winery. Oh yes, there is also the National Baseball Hall of Fame.

Despite the latter, people of culture and civilization still go to Cooperstown and walk up and down Main Street. Then they surreptitiously sneak away and drive along the lakeshore towards the Alice Busch Opera Theatre.  The Cooperstown Association for the Preservation of Civilization advises visitors to put on a baseball cap (preferably Blue Jays so no one will notice or care) and sneak by the village’s only traffic light and go to the Alice Busch Opera Theatre without arousing suspicion. The cap lets you enter any one of the ten thousand shops selling baseball memorabilia so you can camouflage the real purpose of your visit.

Back to civilization. This year the Festival offers six productions among other events. There is something new, Blue, something old, La Traviata, something modern, The Ghosts of Versailles, and something classic American, Show Boat. In addition to these, there is a production of Benjamin Britten’s Noah’s Flood by the Glimmerglass Youth Ensemble and a version of Tchaikovsky’s The Queen of Spades. 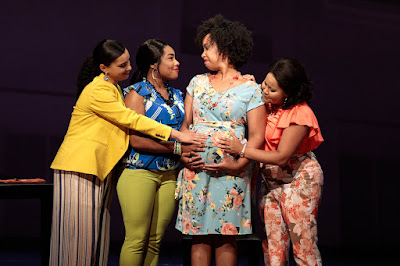 (From left) Mia Athey as Girlfriend 3, Brea Renetta Marshall as Girlfriend 2, Briana Hunter
as The Mother and Ariana Wehr as Girlfriend 1. Photo: Karli Cadel/The Glimmerglass Festival
Blue is a new opera that was commissioned by Francesca Zambello, the Festival’s Artistic and General Director. The title refers to the colour of the uniform of the New York City police. The music is by Jeanine Tesori whose first opera A Blizzard on Marblehead Neck premiered at the Glimmerglass Festival in 2011. The libretto by Tazewell Thompson tells the tragic story of a family living in Harlem that is also a parable of the life of blacks in America.

As becomes a story about a people as well as a family, the characters are not given names. The main characters are the Father (Kenneth Kellogg), the Mother (Briana Hunter), the Son (Aaron Crouch) and the Reverend (Gordon Hawkins). The Mother has three girlfriends and the father has three friends who also act as members of the Congregation.

We first meet the Mother who is deliriously happy about being pregnant. Her friends are more practical, perhaps cynical and advise her that the rule is “thou shall not bring black boys into the world”. The Mother’s excitement is undiminished. We meet the Father who is a rookie police officer and deeply in love with his wife and thrilled at the prospect of fatherhood.

The Mother and the Father have friends and belong to an integrated society that should reflect the America Dream. They have every right to belong and think that they belong. That notion is quickly shattered.

When the Son is 16, he rebels against the racial injustice in America that besmirches its history like a huge streak of blood on a white sheet from the arrival of the first slave in 1619 to last week’s shooting of a black man by the police. The Son engages in peaceful protests against the endemic racism around him and has a falling out with his Father. He is shot dead by a police officer.

The family and the dream of a good life are destroyed. The Father becomes bitter, hateful and thirsting for revenge. The mother is distraught and the effect of racism is brought into horrifying relief. It is a portrait of America.

After the son’s funeral, there is a dream sequence which paints a picture of what might have been if the son had not been killed.

The libretto tells a simple story, almost mundane in view of what occurs so frequently. One becomes almost anesthetized at its horror. It is a parable and not a documentary account and it is more powerful for its simplicity.

Tesori’s music is beautifully modulated and apt for the changing scenes of the opera. It opens with dark, foreboding music but we quickly get into the uplifting scenes of happiness and hope.

We experience the jarring notes of the fight between father and son; the attempt by the Reverend to preach forgiveness in the midst of anger, and desire for revenge. During the funeral scene, we hear the congregation sing airs with the cadence of Negro spirituals until the final notes of resolution in the dream sequence.

Bass Kenneth Kellogg as the Father is big physically and vocally. He has a marvelously resonant voice with some rumbling low notes. He goes from a buddy with fellow police officers, to a happy new father, to a man who is hated by his teenage son, to a vengeful man and finally to one who is reconciled through his faith. It is a tough role that Kellogg handles superbly. 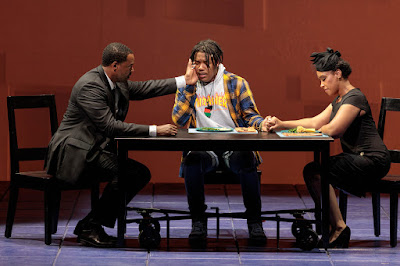 (From left) Kenneth Kellogg as The Father, Aaron Crouch as The Son and Briana
Hunter as The Mother. Photo: Karli Cadel/The Glimmerglass Festival
Briana Hunter is a young singer who as the Mother starts as an attractive, spirited and happy woman who is excited about motherhood, deeply in love with her husband and must face the reality of racist America. A well done performance by Hunter.

Bass Gordon Hawkins played a well-sung and sympathetic Reverend giving Christian hope in a situation where there is little room for it.

The Son (Aaron Crouch) and the six singers who made up the three girlfriends, three friends of the Father and the congregation, all members of the Festival’s Young Artists Program, did fine work supporting the main characters.

The set by Donald Eastman consisted of a few pieces of furniture as required for each scene in front of a backdrop of a three-story apartment building.

Librettist Tazewell Thompson also directed the production with economy and simplicity as becomes the telling of a parable.

John DeMain conducted the Glimmerglass Festival Orchestra in a fine performance of a new work.

Back to reality. The advisability of wearing a Blue Jays cap as camouflage in Cooperstown may be short-lived. There is strong evidence that the Toronto team will do in baseball what the Raptors did in basketball. In that case being seen in an American town with or without an opera festival with the cap of a Canadian team becomes highly risky.
_________
Blue by Jeanine Tesori (music) and Tazewell Thompson (libretto) is being performed eight times between July 14 and August 22, 2019 at the Alice Busch Opera Theater, Cooperstown, New York. Tickets and information (607) 547-0700 or www.glimmerglass.org

James Karas is the Senior Editor - Culture of The Greek Press. www.greekpress.ca
Posted by James Karas at 9:56 PM