The Shaw Festival has staged its own version of Edmond Rostand’s legendary Cyrano de Bergerac. Playwright Kate Hennig was commissioned to translate and adapt the verbally sparkling, ironic and seriously romantic play. She has delivered a prose translation to be performed by fourteen actors, seven men and seven women. Seven of the actors are assigned individual roles while the other seven must handle as many as five roles. That does not create many issues because most of the secondary characters do not present a problem.

The balcony scene and the recognition scene at the end of the play are the best and most memorable parts of the play and I dare say the raison d’etre of its popularity. There are several other decent scenes but the swashbuckling and the battle scenes, for example, leave me less than thrilled. 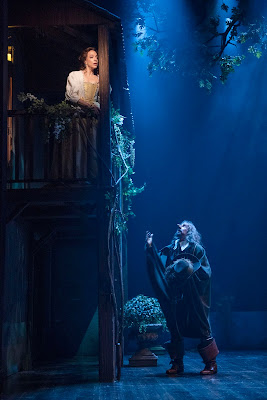 Deborah Hay as Roxane and Tom Rooney as Cyrano in Cyrano de Bergerac.
Photo by Emily Cooper.
The central character is of course Cyrano played by Tom Rooney. He is a man of many talents from a great and brave swordsman, to a poet, an idealist and a fighter against hypocrisy. Unfortunately, he is ugly and lives in great fear of being mocked. He loves deeply but is afraid to approach a woman. Even his mother did not love him. He does fall in love with his cousin, the beautiful Roxane, but she is in love with the handsome cadet Christian (Jeff Irving).

Roxane, played by Deborah Hay, is a woman of beauty with a taste for poetry and a desire for romance. She falls in love with Christian’s beauty, but she expects much more from him. She finds the higher virtues that Christian cannot express orally in the balcony scene and in “his” letters and poetry. These reach their apogee in the balcony scene where Cyrano speaks the poetry of love pretending as to be Christian. The ruse continues when Cyrano writes letters to Roxane from the war front all the time pretending that they are from Christian.

I found the balcony scene disappointing. Cyrano’s wooing of Roxane as if he were Christian begins haltingly and picks up speed like a force of nature. He first wants to bring down the stars from the sky and beat Cupid at his own game. There is a build-up of passion that reaches an emotional paroxysm in both Cyrano and Roxane. She trembles, weeps, is drunk with love and declares herself his. In that climactic moment, Cyrano declares that he is ready to die. 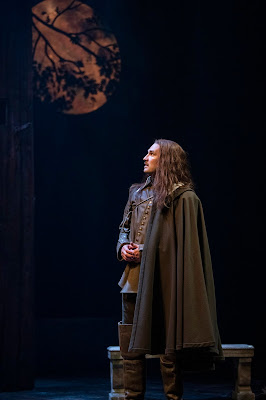 Rooney and Hay fell short of reaching that emotional Everest. They are good but I think the scenes demand more than they delivered. Cyrano’s death when he utters his last word “panache” evoked some laughter from the audience. Good grief!

Hay and Rooney are no doubt capable of expressing great emotional ranges and I am not sure why director Chris Abraham chose to understate the depths felt by the characters in these scenes.

Irving as the handsome and verbally challenged dolt wins and keeps Roxane on the love and letters of Cyrano. He is just a prop and perhaps a symbol of the vacuity of beauty, but we give the actor credit for his representation. The other characters that are of more than minor importance are the poet Rageneau (Kyle Blair), the nasty De Guiche (Patrick Galligan) and Le Bret (Tanja Jacobs).

With the significant exceptions noted, the production is well done. The opening scene where Montfleury (David Adams) is thrown off the stage and the crowd scenes are well done. The scene in Rageneau’s bakery between Cyrano and Roxane is moving. The boom-boom scene in the Siege of Arras has its moments.

The set design by Julie Fox is good and efficient for the locales of the action.
_____________
Cyrano de Bergerac by Edmond Rostand in an adaptation by Kate Hennig will run in repertory until October 20, 2019 at the Royal George Theatre, Niagara-on-the-Lake, Ontario. www.shawfest.com.

James Karas is the Senior Editor - Culture of The Greek Press. www.greekpress.ca
Posted by James Karas at 9:22 AM