On the cover of its programme the Blyth Festival lets you know exactly what it offers: Live, Original, Canadian, Theatre. That is admirable truth in advertising. The Blyth Festival is in its 45th season and that alone is an admirable achievement.

This year the Festival offers seven productions, two of them world premieres. Colleen Curran’s Cakewalk is listed as an encore but the play had its premiere at the Festival in 1984 so it is very much a Blyth play.
Director Kelli Fox describes it as a “deliciously silly comedy” and she is spot on. The play takes place in a small town where the residents are having a festival to celebrate Canada Day. One of the events is a cake contest and the first prize is a trip to Paris. The play is set in the community hall where a few of the cake-making contestants are gathered. We hear the music, announcements and commotion of the festive activities outside. 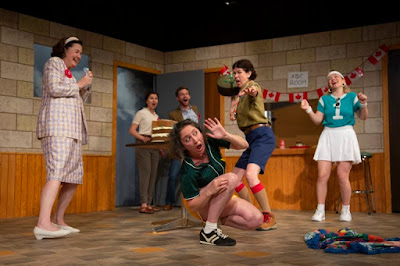 .
The comedy is built around five contestants and the daughter of one of them who are interesting and just plain funny. Leigh (Rachel Jones) is an attractive and decent teacher who has a distinctive position in society that proves to be problematic – she is a nun. She will face conflicting situations that are awkward and amusing.

Martha (Rebecca Auerbach) plays baseball and she comes to the fair in her team uniform because the game was delayed. She gets barbs about her attire but she gives back as much as she takes. We also have the self-righteous, bitchy and nasty Girl Scout den mother Ruby (Catherine Fitch. She is scheming and dishonest, and will do anything to win.

On the nice side of the spectrum we have Taylor (Nathan Howe), an archeologist, a decent guy and a klutz. He is the only male contestant and he is entering the Tut Coconut Cake but he has other issues to contend with. He has a serious reaction to Leigh. He can’t make it up a few steps without stumbling or falling and he wants to tell Leigh how he feels about her but she does not want to hear it because she is already spoken for – to the convent. 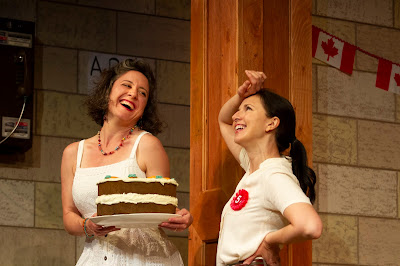 Rebecca Auerbach and Rachel Jones in Cakewalk.  Photo credit: Terry Manzo.
Howe is a master of physical comedy and he and Jones produce some wonderful comedy as we watch their romance blossom.
There are enough complications to keep the plot going in high and the higher gear as we wonder what will happen next and laughing heartily much of the time. Kelli Fox of Shaw and Stratford Festivals fame has changed gears herself and gone into directing and does a superb job of handling the cast and comedy with a light touch. The cast is wonderfully responsive to the comedy and the audience responded with appreciation.

The action takes place on a single set - a room in the community centre with several doors, a stairwell and a closet. Set Designer Laura Gardner gives us the flavour of every community center we have ever seen.

Oh, yes. The cake contest. Every contestant has a cogent reason and desire for wanting to win. In the end the contest is resolved quite satisfactorily. Tiffany probably marries what’s-his-name and we have no doubts about the future happiness of Leigh and Taylor.

The winning cake was made by …..go see the play.
_________
Cakewalk by Collen Curran continues until August 10, 2019 at the Blyth Memorial Hall, Blyth, Ontario, blythfestival.com

James Karas is the Senior Editor - Culture of The Greek Press. www.greekpress.ca
Posted by James Karas at 8:23 PM