The Shaw Festival’s production of Tennessee Williams’ The Glass Menagerie has many strengths but there are choices made by director Laszlo Berczes that do not serve the play well. The production is in the Jackie Maxwell Studio Theatre in a small playing area with spectators on all sides. There is an immediacy and intimacy that can bring the audience inside the drama. But it works only partially.

Before the lights go down we see Andre Sills talking to audience members and doing magic tricks. He is flamboyant and entertaining but then takes his cap off and starts with the monologue of Tom, one of the main characters of the play. His first words are indeed about tricks that he has up his sleeve but he tells us that he is the opposite of a magician. He is supposed to be dressed as a merchant marine which is what he becomes after abandoning his mother and sister. His tone is plangent, he expresses grief, sadness, perhaps guilt. Having him entertain the audience as a magician serves no purpose. We have started on the wrong foot.

We get to know him much better as the play progresses and Andre Sills is a sympathetic Tom, a man of dreams caught in the reality of a lousy job in a shoe factory and a miserable situation at home. 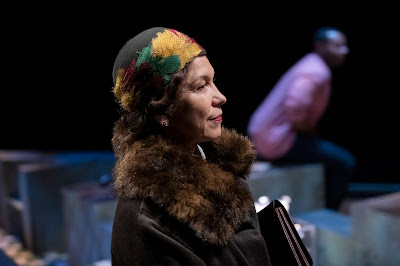 Allegra Fulton as Amanda and André Sills as Tom in The Glass Menagerie
(Shaw Festival, 2019). Photo by David Cooper.
At home he has his mother Amanda, a complex character whose interpretation is pivotal to the play. Allegra Fulton does a fine job in the role as far as she is allowed. Amanda lives in an illusory world of the past. The world of wealth, servants, class, gentility and gentlemen callers in the South of her imagination.  It is pathetic, almost laughable but at the same time heart wrenching to see someone living in a world of illusion so vividly imagined.

There is another side to Amanda. In her illusions and ambitions for her children and in her struggle to control things and make ends meet, she goes seriously overboard and becomes at time simply ridiculous. Perhaps even laughable. Berczes does not allow Fulton’s Amanda to become ridiculous. He keeps a tight rein on Amanda and though we see her devotion to her children we do not see how unbearable she can be to the extent that she drives Tom to abandon her and his beloved sister.

Laura is a sad and at times pathetic person. Julia Course’s portrayal shows us only a part of this. Her body language is superb even if her deformity with a shorter leg is underplayed. The issue I have is with Course’s voice. She speaks in a ringing tone that bespeaks confidence and belies deformity, physical and psychological. She is crushed physically and psychologically and her only defence is her escape to the world of her glass figurines.
Jim, the gentleman caller, was a high school hero on whom Laura had a crush. Dare I say that Jonathan Tan despite his fine delivery of his lines, does not convince one as a former hero who has not reached his potential but has lost none of his confidence?

The set by Balazs Cziegler is perfect for the compact playing area and the non-realistic tenor of the play. 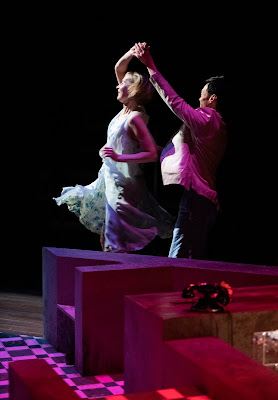 Julia Course as Laura and Jonathan Tan as Jim in The Glass Menagerie
(Shaw Festival, 2019). Photo by David Cooper.
Tom and Laura have deep affection for each other and they know their mother’s idiosyncrasies and idiocies well enough to have developed ways of dealing with them. They roll their eyes and bump their shoulders when Amanda goes on one of her tirades. This is admirable sibling love but is also suggests a system of defence. If they could defend themselves against their mother, Tom may not have to abandon them. A nice touch but it is misleading about Laura who is defenseless in the real world.

The Glass Menagerie is a powerful play but Berczes in his conservative and restrained approach has robbed it of some of its emotional power. Tom, Laura, Amanda and indeed Jim (despite his surface self-assurance) live on the edge of emotional collapse. There is no way out for them.

To be fair, Berczes has added a beautiful dream sequence in which Laura and Jim dance around the stage before reality lands on Laura and crushes her. It is a brilliant directorial stroke.
_________
The Glass Menagerie by Tennessee Williams continues in repertory until October 12, 2019 at the Jackie Maxwell Studio Theatre, Niagara-on-the-Lake, Ontario. www.shawfest.com.


James Karas is Senior Editor - Culture at The Greek Press. www.greekpress.ca
Posted by James Karas at 12:10 AM