THE RUSSIAN PLAY AND SEX – REVIEW OF 2019 SHAW FESTIVAL PRODUCTIONS

The Russian Play by Hannah Moscovitch is a jewel of a play that receives a gem of a production at the Shaw Festival. It is a 50-minute lunchtime performance and all it does is leave you hungry for more.

The play is set in a town somewhere in Russia in the era of Stalin sometime in the 1920’s.
Sonya (Gabriella Sundar Singh) narrates and acts in her own story.  She works in a flower shop near the town cemetery and is the mistress of Piotr (Peter Fernandes), the married gravedigger.  She is found out and driven out of town for her conduct. She goes to another town and becomes the mistress of the rich and married Kostya (Mike Nadajewski).

There is an ever-present violinist (Marie Mahabal) that accompanies Sonya in the telling of her story. 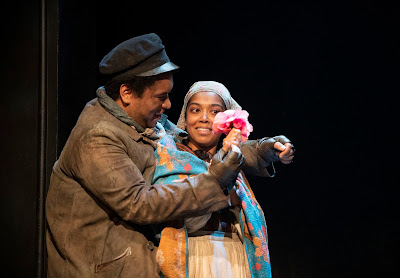 Peter Fernandes as Piotr and Gabriella Sundar Singh as Sonya in
The Russian Play. Photo by David Cooper.
Singh gives a superb performance as Sonya, a woman used and abused but with enough spunk and humour to face life fearlessly. She faces the audience, draws them in, tells them that this is a love story and then asks the vital question: where do you hide a piece of bread?

Fernandes as the rootless gravedigger is digging room for young and old alike. For the rich Kostya Sonya is just another piece of meat who succumbs to him out of necessity but with little hesitation.

The violinist provides a moving obbligato to the play but I am not sure why she attacks Sonya sexually in the opening scene of the play. The mention of Putin is anachronistic and unnecessary.

This is a moving, funny, wonderful play about society and a strong woman that is done to perfection. A standing ovation for director Diana Donnelly and the cast. It may be lunchtime theatre but it is worth the trip to Niagara-on-the-Lake to see it alone.

Mae West still looms in the North American imagination as a sex symbol and perhaps more so for some of her bon mots: “Is that a pistol in your pocket, or are you just glad to see me?” Less well known may be the fact that she wrote some ten plays which are, to put it very politely, rarely performed.

The Shaw Festival has staged her 1926 play Sex. The theatrical palaeontologist who dug up the play deserves a tip of the hat largely because the story surrounding the play is much more interesting than the play itself.

It’s 2019 and as I am walking towards the Festival Theatre and a friendly usher asks if I am going to see “the play by Mae West because I am not allowed to say the title.”  We both laugh but he keeps his delightful vow of silence. 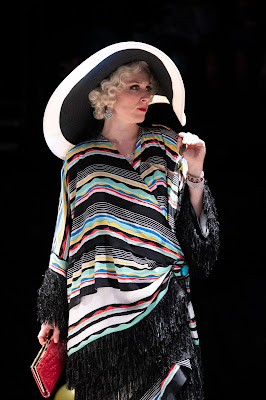 Diana Donnelly as Margy LaMont in Sex (Shaw Festival, 2019). Photo by David Cooper.
When the play was first produced many New Yorkers were freaked out by its immorality (hint: it deals with pimps and prostitutes). West was convicted and sentenced to 10 days in jail. She spent eight days in the clink not because she had to but because it was good publicity.

The Shaw Festival offers the following: (a) a play written, produced and directed by Mae West in 1926. (b) a Canadian premiere – the play has never been revived anywhere. (c) a play about S-E-X with hookers, pimps, drugs and fun stuff like that. What more do you want?

You may want to see a good play too but you can’t have everything.

A few words about the plot. Margy Lemont (Diana Donnelly) is a blonde hooker that, to use West’s words, has been in more laps than a napkin. And she looks it. Lieutenant Gregg (Andre Sills), an English naval officer with an atrocious English accent, is a customer who is in love with her. Really in love with her.

Jimmy Stanton (Julia Course), a scion of a rich family is not a customer but is madly in love with her and wants to marry her. Why is Jimmy played so awkwardly by a woman? And why is hooker Agnes played by Jonathan Tan, a man?

Pimp Rocky (Christopher Bowman) drugs and robs Jimmy’s mother Clara (Fiona Byrne) who is the spitting image of Margy, whose life is saved by Margy who does not want her son to marry Margy but who has to keep her mouth shut because Margy knows what Clara was doing with the pimp. Clear?

The play has a considerable number of roles and many of the actors take two or more roles.

Why do Director Peter Hinton-Davis and Designer Eo Sharp think that piling suitcases and trunks in what is supposed to be Margy’s apartment appropriate set décor? The Stanton pad looks just fine in the last act.

New Yorkers loved the play in 1926 and to hell with bad reviews. Maybe hearing Mae West say “let me check what’s happening down in the English Channel” as she groped below Lieutenant Gregg’s belt was worth it.

We will have to settle for acquiring the right tell our heirs, executors, successors and whoever did not go to the Shaw Festival this season– after we scan our surroundings for possible moral turpitude – that we have seen Sex by Mae West.
____________
The Russian Play by Hannah Moscovitch continues until October 12, 2019 on various dates at the Royal George Theatre. Sex by Mae West continues in repertory until October 13, 2019 at the Jackie Maxwell Studio Theatre, Niagara-on-the-Lake, Ontario. www.shawfest.com.

James Karas is the Senior Editor – Culture of The Greek Press www.greekpress.ca