WAITRESS – REVIEW OF BROADWAY MUSICAL AT THE ED MIRVISH THEATRE


A waitress is not exactly on the upper rungs of the labour ladder. But Jenna Hunterson has it way worse than that. She is a waitress in a diner, married to an obnoxious and abusive husband and pregnant without wanting to be.


On the plus side, she has a talent to make pies that are “biblically good” and has some gumption. In other words, there is enough in her situation for a movie and then perhaps a musical. With music by Sara Bareilles and book by Jessie Nelson, welcome Waitress to Broadway and around the world.


Pretty, sympathetic and pregnant, Jenna (played by Christine Dwyer in Toronto) has some good company in Joe’s Diner where she works. There is her blustering, oversized boss Cal (Ryan G. Dunkin), her dippy co-worker Dawn (Ephie Aardema) and the lively Becky (Melody A. Betts). Also present is the crotchety owner Joe (Richard Kline) who does have a nice side. 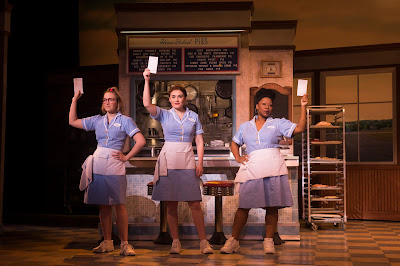 Ephie Aardema, Christine Dwyer and Melody A Betts in the National Touring
Production of WAITRESS - Photo Credit Daniel Lippitt
We need complications. Jenna’s husband Earl (Jeremy Woodard) is a violent and disgusting jerk who wants his wife to promise not to love their child more than she loves him. He is just a gem. A tip of the hat to Woodard but no more need be said about Earl.


Her obstetrician, Dr. Pomatter (Steven Good), is handsome, neurotic and displays all the symptoms of television sitcom laughter generator. But he is attracted to the pretty Jenna and they have an affair even though it is “A Bad Idea”. Before you call the Discipline Committee of the Medical Association, take notice that the affair is Jenna’s idea first, that the good doctor is a reluctant participant and it is resolved satisfactorily. But for a while they could sing “You Matter to Me.”


There is also a pie-making contest with a first prize of $20,000 that Jenna is encouraged to enter. Can she win the contest or marry Dr Pomatter or win a lottery to find happiness? Is there another path? I am not telling.


Dwyer performs very well in all aspects of her character from singer, to abused wife to a friend and a woman with aspirations caught in an awful situation.


Becky is unhappily married (she has to change hubby’s diapers three times a day) and she finds happiness with Cal. His wife is a lesbian. You see, we maintain high moral standards. Aardema gives a high-spirited performance and Dunkin as Cal proves that he is a decent human being even if he huffs and puffs as a boss. 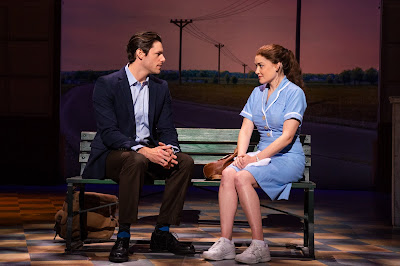 Steven Good and Christine Dwyer in the National Touring Production of WAITRESS -
Photo Credit Philicia Endelman
Dawn the misfit lands a bigger misfit in Ogie (Jeremy Morse) via internet dating and the two become the comic hub of the evening. They express their love in “I Love You Like a Table”. Marvelous performances by Betts and Morse.

Some of the songs reflect the guiding background product of the musical, the scrumptious pies and we hear “What Baking Can Do”, “It Only Takes a Taste.” But what is most important for the waitresses is sung in “A Soft Place to Land.”

The sets by Scott Pask from the diner, to the doctor’s office to Jenna’s home are good and the change of scene is done briskly to maintain a fine pace for the musical. Diane Paulus directs well.

The music and the dialogue were unacceptably loud during the first act but the volume was reduced to acceptable levels during the second act.

James Karas is the Senior Editor - Culture of The Greek Press. www.greekpress.ca