I don’t think anyone has considered Mozart’s Requiem – a mass for the dead – as an opera. It is his last composition and he left it seriously unfinished because, well, he died. Don’t tell conductor Raphael Pichon and director Romeo Castellucci that – they know he died, they think the Requiem can serve as an operatic work. They have taken Mozart’s unfinished work and by adding from his other compositions and works by other composers have fashioned a glorious evening at a mass for the dead, make that the opera.

There is plenty of choral music to be sure but there is also joyous singing and dancing, a review of some historical events and finally a wonderful and completely unexpected affirmation of life. 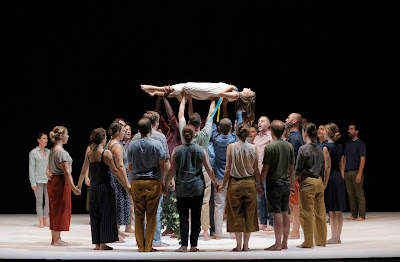 Aix-en-Provence Festival 2019 © Pascal Victor / Artcompress
The evening begins with a bed on the stage and a woman smoking. We hear a beautiful voice singing a cappella an anonymous hymn about Christ being obedient unto death for us and exalted by God. The orchestra joins in with somber music and we hear male voices chant “he filled me with bitterness” from Mozart’s K 477B.

People come on stage dressed in black and carrying black flags. They drape the deathbed as we listen to the Introit, the first part of the Requiem proper. A Kyrie eleison sung by the chorus follows that is so splendidly done it rises to the ears of the Lord in heaven.

We do the entire Requiem as put together but Pichon and Castellucci and see delightful, celebratory dances in colourful East European costume. Evelin Facchini is responsible for the gorgeous and spirited traditional choreographies.

Through generous use of projections, Pichon and Castellucci with dramaturge Piersandra Di Matteo also attempt to list and illustrate in part how we have evolved from vertebrates to homo sapiens. They also list all that we have lost, all that has died. The civilizations or cities that have disappeared from the Minoans, the Myceneans, the Etruscans, the  Lydians, the Phrygians, the Illyrians, the  Pelasgians and a host of others. 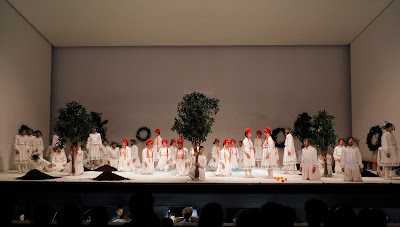 Aix-en-Provence Festival 2019 © Pascal Victor / Artcompress
The number of categories of things from the past and the present that that they presented were so fascinating in themselves that they ran the danger of being distracting.

The last part of the requiem, Communion, sung by the entire chorus is an invocation to the merciful Lord to grant the dead eternal rest with the saints forever. The evening finishes with the beautiful traditional burial service mass for male voices “In Paradisum.”

An unforgettable evening.
___________
Requiem by Wolfgang Amadeus Mozart with additional chants by other composers as put together by Raphael Pichon, Romeo Castellucci and Piersandra Di Matteo is being performed eight times until July 19, 2019 on various dates at the Théâtre d l’Archevêché, Aix-en-Provence, France. www.festival-aix.com


James Karas is the Senior Editor - Culture of The Greek Press - www.greekpress.ca/