The Aix-en-Provence Festival does not hesitate to stage original, often brilliant, sometimes touched by genius productions of operas.  For example, Russian director Dmitri Tcherniakov turned Carmen into a psychiatric therapy session. He turned Don Giovanni into a family drama that takes place entirely in the library of the Commendatore’s house. Peter Sellars took Mozart’s mostly lost Zaide and turned it into a melodramatic anti-slavery tract to compete with Uncle Tom’s Cabin. And Rigoletto found work in a circus.

We all know that the first act of Tosca takes place in the grand church of Sant’Andrea della Valle in Rome where Mario Cavaradossi is painting and hiding the escaped political prisoner Angelotti. Wrong. 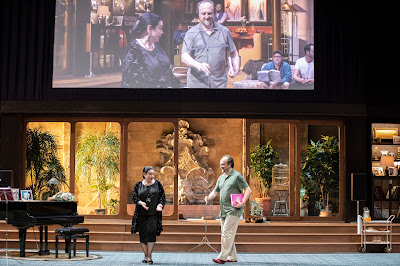 Aix-en-Provence Festival 2019 © Jean-Louis Fernandez
This production directed by Christophe Honoré opens in the posh apartment of a diva who is listening to Vissi d’arte on a CD and on a projection screen we see the CD spinning. She is listed as the Prima Donna (Catherine Malfitano) in the program who speaks English to her son and he replies in French. They are getting ready for a crew to film a rehearsal of Tosca.

Puccini steps in and we see the Sacristan (Leonardo Galeazzi) doing his bit at a lectern, score in hand. We will see almost all the characters grab a score and check what they are supposed to be singing. It’s all a casual rehearsal as we see the diva roaming around the numerous people who are doing their job. Tosca (Angel Blue), Cavaradossi (Joseph Calleja) and Angelotti (Simon Shibambu) are going through their roles. The nasty Scarpia (Alexey Markov) appears and proves that he can sing the role but there is no reason to get all worked up. It is just a casual rehearsal.

We get the joke and now can we get on with the performance in the second act? We are in Scarpia’s apartment in the Palazzo Farnese. There are several rooms and screens above them so we can see everything from a different angle or close up. The Prima Donna is everywhere and she will be with us almost uninterruptedly until the end of the opera. She does not sing.

Are we going to see the grotesque evil of Scarpia, hear Cavaradossi being tortured and witness Tosca kill the loathsome creep. Why bother during a rehearsal? Singers move around, they sing but not much else is required of them. We see Cavaradossi drinking and eating at the beginning of the act and lying on a bed with the Prima Donna sitting by him   while he is supposed to be tortured 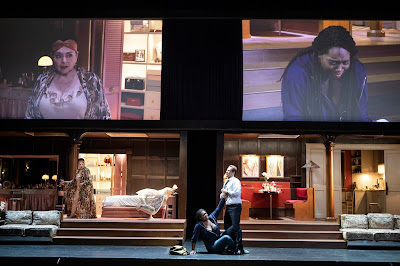 Tosca throws some ketchup on Scarpia when she is supposed to be murderously stabbing him but the whole atmosphere is laid back. Angel Blue does get to sing Vissi d’arte but why let her show off her vocal splendour? The projection screens are there so let’s show photos of other sopranos in the role. Photographs of Maria Callas, Renata Tebaldi, Leontine Price and, you guessed it, Catherine Malfitano appear on the screen. Is there a point to this? Is Angel Blue joining the ranks of the erstwhile greats? Is she surpassing them? Is there a reason to spoil her singing by having us look at photographs of other singers?

By this time you figure it can’t possibly get worse. Wrong.

For the third act which takes place on the battlements of the Castel Sant’Angelo, the orchestra is brought on the stage leaving no room for much else. There is a miniature of the castle at the side of the stage and we get a close up of Ms Malfitano looking into it. She walks across the audience to the other side of the theater and sits on the stage. She will go and touch the conductor and walk through the orchestra during the scene and when Tosca and Cavaradossi are singing their incredibly moving duet she will be right there with them. When Tosca is supposed to be jumping off the parapet (she does not), Malfitano will be lying down on a terrace above the orchestra. 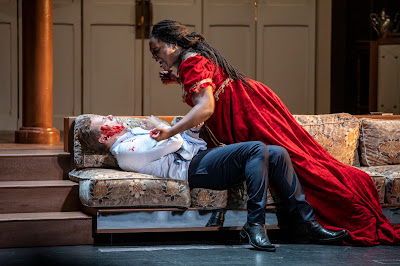 Aix-en-Provence Festival 2019 © Jean-Louis Fernandez
That is not all. The third act switches from a rehearsal to a concert performance. Cavaradossi appears in a tux and sings “E lucevan le stele” and Tosca comes out dressed to kill. She gives instructions to Cavaradossi about how to act after the fake shooting while he is standing on the side of the stage near the model castle and she is centre-stage. He is not shot and she does not jump off anything but simply raises her hand.

This is only a partial list of the unbelievable things in this production. I can add many more and express my disbelief that they actually put on a production like that. Is this what we can expect from Pierre Audi, the new Artistic Director? Or is the production touched by such genius that I missed it?
__________
Tosca by Giacomo Puccini is being performed eight times between July 4 and 22, 2019 as part of the Aix-en-Provence Festival at the Théâtre de l'Archevêché, 26 Rue Gaston de Saporta, Aix-en-Provence, France. festival-aix.com/fr