The Aix-en-Provence Festival is in its 71st season which shows admirable longevity and it has a new artistic director, Pierre Audi, which promises change and renewal. Audi has scheduled six operas for the season most of them never seen at the Festival in Aix before.

One of the new productions is Jakob Lenz, a one-act chamber opera composed by Wolfgang Rihm on a libretto by Michael Fröhling which premiered in Hamburg in 1979. It has been produced in cities across Europe but it has made only a couple of tentative steps in the United States with productions at the Julliard Theater in New York and in Bloomington. I can find nothing about it being produced in Canada. 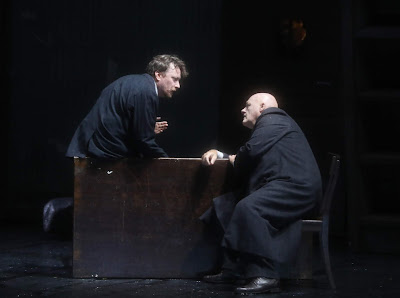 
The opera is based on a novella by Georg Buchner, the man who provided the material for the more famous Wozzeck. It tells the story of the poet Lenz (Georg Nigl) who has serious emotional and mental issues (probably schizophrenia) not the least of which is his mourning for his love Friederike. He roams the mountains, hears voices and ends up with his friend Pastor Oberlin (Wolfgang Bankl).

The closely written and intense novella which deals largely with internal turmoil would appear to be almost impossible to transfer into a libretto but Fröhling has managed to do it. It may be worth noting that Lenz, Oberlin and Kaufman are historical figures.

Lenz stays with Oberlin for a while but his emotional turmoil, the voices that he hears and the images of Friederike that haunt him drive him back to the mountains. He hears the voices again and despairs of finding Friederike.

Their friend Kaufman (John Daszak) joins them. He is a friend of both men, but Lenz’s mental illness makes it impossible for them to deal with him and they finally put him in a straitjacket, tie him up to a bed and leave him.

The emotional and even intellectual breadth of the opera takes your breath away and the performance of Austrian baritone Nigl is simply heroic. Austrian bass-baritone Bankl as Oberlin and British Tenor John Daszak as Kaufmann give impressive performances though the demands on them are not as strenuous.

The opera has 2 sopranos (Josefin Feiler and Olga Heikkila), two altos (Camille Merckx and Beth Taylor) and two basses (Dominic Grosse and Eric Ander). They provide the eerie atmosphere and stamp the mental hell in which Lenz agonizes.

The music is modern, dissonant, sometimes jarring, sometimes cacophonous and at times harmonious. It represents the violent emotional tempests that Lenz is going through as he hears his voices, jumps into pools of water (indicated only metaphorically in this production), tries to revive a young girl who he thinks is Friderike and bears a cross in unmistakable emulation of the suffering of Jesus. It is heavy-duty stuff. 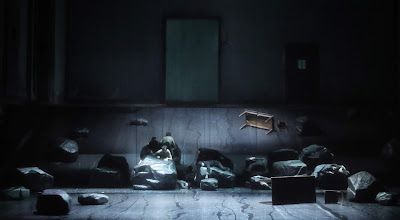 Aix-en-Provence Festival 2019 © Patrick Berger / Artcompress
It is a dark opera done in modern dress. The stage décor by Martin Zehetgruber represents metaphorically and economically the rocky mountains, Oberlin’s residence and the more bizarre states of mind of the half-naked and Christ-like Lenz. He is seen wedged on what looks like a shelf and in positions of pain as he wrestles with his voices, God and his own dementia.

Director Andrea Breth handles the intense and overwrought material with a skillful hand as she takes us through the complexities of the plot in an hour and a quarter with no intermission.

Ingo Metzmacher conducts the Ensemble Modern orchestra through the permutations of what sounds like a very difficult score.
___________
Jakob Lenz by Wolfgang Rihm is being performed three times in reprise of the 2014 Stuttgart Staatsoper production. On July 5, 8 and 12, 2019 at the Grand Théâtre de Provence, Aix-en-Provence, France. http://festival-aix.com/

James Karas is the Senior Editor – Culture of The Greek Press. www.greekpress.ca
Posted by James Karas at 8:00 PM