Les Mille Endormis (The Sleeping Thousand) is a one-act chamber opera by Adam Maor (music) and Yonatan Levy (libretto). Maor is Israeli, born in 1983, and Levy is Canadian, born in 1973, and Les Milles is their first foray into the creation of an opera. The work has been commissioned by the Aix-en-Provence Festival and the theatres of the city of Luxemburg among others. It premiered in Aix on July 6, 2019.

The sleeping thousand of the title are Palestinian detainees of Israel who have gone on a hunger strike.  The result is a type of biblical plague. The earth will not grow food, the crops grow dead and there is a real crisis. The United Nations is considering a resolution to stop rainfall over Israel and the United States will not veto it Reality and unreality go hand in hand.

The opera is cast for four singers. The Prime Minister sung by Polish baritone Tomasz Kumiega is a classic politician beset by a problem that he is out of his depth to handle. He deteriorates in front of our eyes as he struggles with an unsolvable problem. 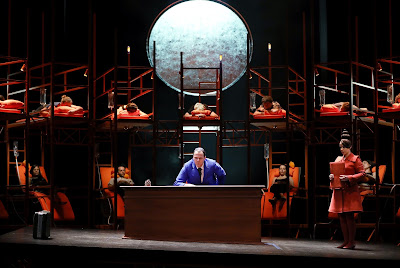 S. is the head of Shin Bet, the Israeli Security Agency and the man who thinks of deftly solving the problem of the hunger strikers. American bass David Salsbery Fry sings the role of S.

French baritone Benjamin Alunni takes on the roles of Minister of Agriculture, the Voice of the People, a protester and the Cantor.

What do we do with the hunger strikers? They cannot be tried or set free or left to die or much of anything else. S. has a solution.  There is no choice but to put all of them to sleep. And we see them arrayed in the Prime Minister’s office on scaffolding all wearing orange overalls.

The plot is part biblical, part science fiction, part theatre of the absurd and with perhaps some expressionism in the heady mix.

Three years after putting the Palestinians to sleep, things seem to be better but not great. Five years later the problems are hallucinations, nightmares and inability to sleep. The Prime Minister, the main character in the opera is starting to lose it.

A Cantor enters and chants Plague of Firstborn Children, an apocalyptic description of pestilence. Jewish babies struck with epileptic fits babbling in Arabic. Blood comes out of a Jewish child’s mouth and it is attributed to tongue-biting caused by involuntary Arabic speech.

This may be satire but it is delivered by the Cantor in a somber monotone addressed directly to the audience. He is dressed in a white robe with a gold, shiny globe on his head that looks like something from a sci-fi show. What are we to make of it?

Seven years later the plague is still on. The Prime Minister has not slept for a long time and the Arabs are eating all Jews at the Khafia. The Prime Minister looks like a jackal. The thousand are not sleeping and Nourit will be sent to infiltrate the Arab world of dreams.

She does go and then Levy gives a quick and unsatisfactory end to the tale. He has only an hour and fifteen minutes and he has packed a great deal for the audience to absorb on a first hearing.  S’s last words are the ambiguous and intriguing “my whole life I have spoken only nonsense.” 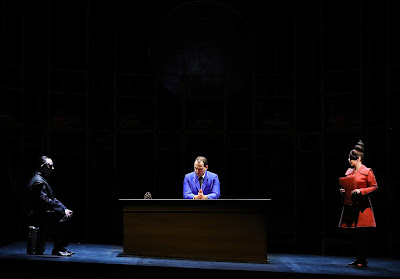 Elena Schwarz conducts the United Instruments of Lucilin, a small ensemble based in Luxemburg that specializes in contemporary music.

The opera has elements of satire, even comedy as it focuses on the Israeli-Palestinian problem. It is sung in Hebrew as the creators look at the huge problem in the Middle East.
Levy is not afraid to satirize the Israelis for jumping to conclusions that are not warranted by the facts and for being basically ridiculous in some aspects of their treatment of Palestinians.

The music is taut, sinuous and at times somewhat monotonous. This is a highly ambitious work that tackles a major political and human tragedy from a number of angles in a very short time. Are they trying to do too much very fast? Perhaps.
___________
Les Milles Endormis  by Adam Maor (music) and Yonatan Levy (libretto) opened on July 6, 2019 and is being performed five times at the Théâtre du Jeu de Paume, Aix-en-Provence, France. http://festival-aix.com/