There is a grove in Toronto’s High Park, surrounded by trees and bounded by greenery where you can find a theatre. The semi-circles of concrete steps that you will sit on may remind you of an ancient Greek or Roman theatre that has seen better days. It may not be Epidaurus but it is Canadian and Canadian Stage has been producing Shakespeare there for decades.

This summer’s offerings are Measure for Measure and Much Ado About Nothing. Measure has been redacted so that it can be performed in ninety minutes with no intermission. You get the core of the play without many details that will require twice as long to perform. Sitting on a thin cushion on a hard surface, it may be as long as you can endure. 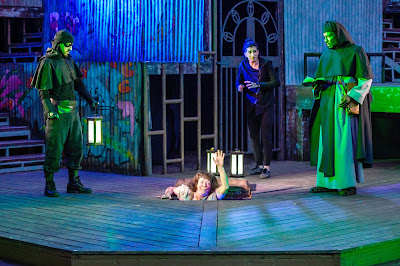 Can Konlekisz, Nora McLellan, Heath V. Salazar and Allan Louis. Photo: Dahlia Katz
Measure for Measure, directed by Severn Thompson, is amazingly well done. It is a fast-paced and well-acted production that makes for perfect theatre under the stars. Severn has little respect for the gender of some characters and has cast women in men’s roles for no apparent reason. It has become almost de rigueur to have transgender casting and I hope the fashion will soon disappear. Doing the play with about a dozen actors required some doubling up so the gender-blind casting may be simply for economic reasons.

The production opens with the cast coming down the aisle chanting a faltering “Kyrie eleison” and when they reach the stage we hear Angelo (Christopher Morris) orating about morality in words not written by Shakespeare. Why? Shakespeare’s play begins where the moral but ineffective Duke (Allan Louis) delegates his powers to tough Angelo who can be trusted to enforce the strict morality laws of Vienna.

The main serious plotline is the attempt by Isabella (Natasha Mumba) to persuade Angelo not to execute her brother Claudio (Richard Lam). He has been condemned to death for sleeping with his fiancée Juliet (Emma Ferreira). The stern and moral Angelo is intent on enforcing the law but he is sexually attracted to the novice nun Isabella and wants to bed her. Thompson has Isabella place her hand over Angelo’s heart during her pleas for clemency and one can see him getting aroused. A well done scene.

Measure for Measure has a large cast of colourful and comic characters from the debauched side of Vienna. They are pimps, prostitutes and brothel keepers, delightful low-lives who are worried about their professional turf. The brothel keeper Mistress Overdone (Nora McLellan), her pimp Pompey (Heath V. Salazar) the extravagant Lucio (Emilio Vieira) who has contacted syphilitic diseases galore, the convict Bernadine (McLellan) who is too drunk to be executed, make up the collection. And there is constable Elbow (Jamie Robinson), not too swift and able to butcher the English language uproariously. 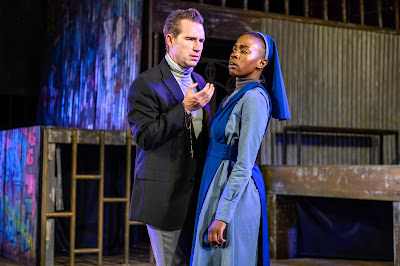 Christopher Morris and Natasha Mumba. Photo: Dahlia Katz
The cast does superb work with this motley collection of characters. We are no doubt concerned with Isabella’s virtue, Claudio’s and Juliet’s fate and the course of justice in Vienna but the world of pimps and prostitutes is a lot more fun.

The single two-story set by Joanna Yu with an iron door and graffiti suggests the seedy side of Vienna and is quite appropriate.

Measure for Measure has been classified as a “problem comedy” and the final scene is a problem for me to watch. The Duke comes in and out of his disguise; Angelo is ordered to marry Mariana (his former fiancée who became the last minute switch for Isabella in his bed:  Lucio is ordered to marry a prostitute and the Duke asks Isabella to marry him. Yikes.

You may not want to worry about all those details and simply enjoy the production and the pizza or other food that you brought to the theatre.
__________
Measure for Measure by William Shakespeare, in a Canadian Stage production in collaboration with the Department of Theatre, School of the Arts, Media, Performance & Design at York University, continues in repertory until September 1, 2019 in the High Park Amphitheatre, High Park, 1873 Bloor St W. Toronto, Ont. www.canadianstage.com