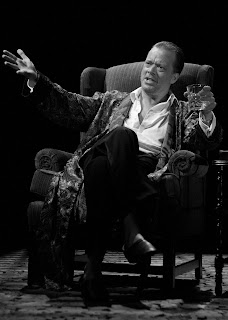 Rodolphe Kreutzer has managed to sneak his surname into history without doing much of anything. He was a prominent violinist in the early 19th century but that would not have entitled him to more than a mention in history books were it not for Beethoven. Beethoven composed a violin sonata and dedicated it to one George Bridgewater, who performed the difficult piece on sight. Violin Sonata No. 9 was dedicated to him until he had an argument with the irascible Ludwig van, who changed the dedication to Herr Kreutzer. Rodolphe did not like the work and he never played it.

Leo Tolstoy was bowled over by the sonata and he named a novella after it in 1889. Listen to the passionate interplay between violin and piano, the fury, almost violence and you will begin to understand what Tolstoy had in mind when he started writing his novella. Imagine the passionate chords of the violin part being played by a beautiful woman and the piano being pounded like a hammer by a man. (In the play, the man is the violinist but I prefer my imagination to the text.)

The sonata and the novella have spawned numerous adaptations and the latest by Ted Dykstra is now showing at the Young Centre in an exceptional one-man show that is also directed by and stars Mr. Dykstra.

Mr. Dykstra plays Yuri, a sophisticated Russian, who tells us his life story while sitting in an easy chair, wearing a silk house coat. He never gets up from the chair and except for some excerpts from the sonata, we only hear him relate the dramatic story of his relationship with his wife. He also paints a picture of the moral universe that he inhabits.

Yuri is patriarchal, to put it politely, or a puritanical, obsessively jealous man who believes that sex should only be practiced for the purpose for procreation. He considers music with its appeal to the senses simply dangerous.

Yuri does marry a woman, he tells us, who is passionate and loves music. What is worse she invites a violinist to the house and they play The Kreutzer Sonata together. They play more than musical instruments, it seems. The squabbles of an emotionally mismatched couple become mortal combat. The clash of the moral universe of the husband with the less elevated world of the sensuous wife becomes a morality tale for all of humanity.

Dykstra’s telling of the tale is nicely modulated and accentuated by playing a few parts from the sonata. He tells the story with controlled anger and moral hauteur. Needless to say, a man of such extraordinary morality does not stop at mere disapproval of conduct that is utterly unbecoming. He simply murders his wife.

The play lasts about an hour without intermission and provides an exceptional piece of entertainment. It is a one act play and therefore not something that one gets to see all that often. It is just one more reason to give Soulpepper a standing ovation for its eclectic choice of plays.
_____