EXIT THE KING – RUMINATION ABOUT DYING FROM SOULPEPPER 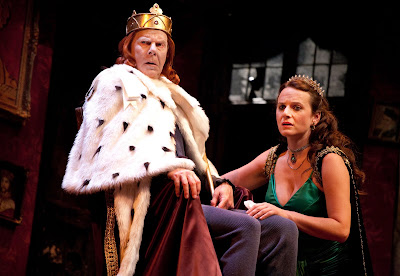 In 1960 Eugene Ionesco’s Rhinoceros opened to great acclaim in London. Theatre critic Martin Esslin attended a party to celebrate the great success and remarked to Ionesco’s wife that the playwright must be very happy. She replied that he in fact is sad. The reason: “He is afraid of death” she said.

In his journal, Ionesco noted how much he dreaded death “from my day of my birth” and it is a subject that permeates much of his work.

Ionesco’s wild imagination turned this fear of death into a cosmic parable and a comic absurdity about dying. Exit the King which was first performed in 1962 is essentially a rumination about realizing that the knowledge and fear of death are about to meet. It is now playing at the Young Centre in a fine production by Soulpepper Theatre Company.

The central character of Exit is King Berenger (Oliver Dennis) who is dying. He is surrounded by his two wives, his Doctor, a guard and a servant. The King orders the sun to come out but it seems to disobey him. He dodders onto his throne and he is unceremoniously informed that he is dying. The King is prepared to die in a few decades or centuries but not now. He is told that he has a couple of hours to live, i.e. until the end of the play.

The play is made up of the juxtaposition of extreme unrealities; Berenger’s kingdom was endless; now it is reduced to a few yards. Berenger was the creator and inventor of everything from the Homeric epics to the airplane; now he is a fool. He has won hundreds of military victories; now he cannot walk up several steps. All of the past and the present belong to the imagination of Berenger and have no relation to reality.

Oliver Dennis is perfect for the role. His Berenger is a lost, frightened and comical soul who staggers around the stage, falls frequently and is incapable of performing the most rudimentary physical or mental activity while maintaining grandiose ideas about the past and planning for an even more grandiose posthumous existence. He wants everything to be made into a memorial for him. He wants to be almost deified and he plans to come back perhaps. Dennis presets the King as a fool, a madman, a dreamer and a frightened person with marvelous ability.

Marguerite (Brenda Robins) is Berenger’s first wife. The husky-voiced Robins plays the Queen as a no-nonsense woman who can be imperious and sarcastic. She is not sentimental and perhaps understands the King better than anyone.

In contrast to her, there is the king’s second wife, Queen Marie played by Karen Rae. Dressed in a beautiful, long gown displaying delightful cleavage, Queen Marie is the opposite of Queen Marguerite. She is sentimental, consoling to the king and tries to be protective of him. A good job done by Rae.

During the second half of the play, the King turns to domestic issues as he approaches death. That reality is brought to him through the servant Juliette (Trish Lindstrom). Lindstrom runs around crouched and has the manner and voice of a servant who is used to taking orders and abuse without differentiating between the two.

William Webster plays the Doctor, Bacteriologist, Executioner and Astrologist. Like Queen Marguerite, he is a no-nonsense person who delivers his lines in a business-like manner. Derek Boyes as the Guard gets to make lots of announcements.

The King is living in a ramshackle palace with a big crack on the wall. The throne room is tilted as if it were sinking, the furniture looks moth-eaten and the throne is a simple chair on a platform. Set and Costume designer Lorenzo Savoini has captured the essence of the play in his designs.

Much credit to Albert Schultz for his directing. The pacing is impeccable and he pays attention to every detail from the staggering of the king to the postures of the maid. He gets superb performances from all the actors.

Exit the King by Eugene Ionesco, translated by Neil Armfield and Geoffrey Rush, opened on August 16 and will run until September 9, 2011 at the Young Centre for the Performing Arts, 55 Mill Street, Toronto, Ontario. www.soulpepper.ca 416 866-8666.
Posted by James Karas at 11:49 AM