A BLIZZARD ON MARBLEHEAD NECK AT GLIMMERGLASS FESTIVAL IN DOUBLE BILL 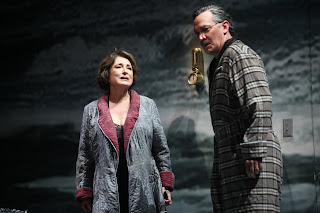 Patricia Schuman as Carlotta Monterey and David Pittsinger as Eugene O'Neill in A Blizzard On Marblehead Neck. Photo: Julieta Cervantes

A Blizzard on Marblehead Neck is the second half of the Double Bill of one-act operas presented by the Glimmerglass Festival. The half-jour opera has music by Jeanine Tesori and a libretto by Tony Kushner.

If John Musto and Mark Campbell in Later the Same Evening give life to the figures painted by Edward Hopper, Tony Kushner has taken an incident from the life of playwright Eugene O’Neill and embellished it into a libretto.

O’Neill and his wife Carlotta Monterey are living in a cottage on Marblehead Neck, Massachusetts. It is February 5, 1951 and a blizzard is raging outside. At 63, O’Neill is suffering from a degenerative disease and is well past his prime as a writer. In fact, his last play that was produced, The Iceman Cometh, received derisive reviews. This is literally, the playwright in winter.

He and Carlotta are at war with scathing insults flying back and forth and vehemence reminiscent of Who’s Afraid of Virginia Woolf. They bring out every piece of dirty laundry from their past and air it with relish as they, especially Carlotta, try to score some points. O’Neill finds solace in listening to an old record which Carlotta takes out of the phonograph and smashes to bits.

That is more than anyone can take and O’Neill walks out into the blizzard where he collapses in the snow. The young woman who sings in the record (played by Lindsay Russell) appears to the hallucinating O’Neill and he is eventually rescued.

This is a bloody good libretto – intelligent, literate, compact and moving. Tesori provides equally good music. Bass-baritone David Pittsinger bears an uncanny resemblance to O’Neill and he brings out the pathos and horror of a man trapped in a prison of age, illness, bad weather and a wife who is relentlessly offensive and hurtful. His resonant voice is an aural delight

Patricia Schuman makes a very effective Carlotta who has to fight over the temperature in their cottage. Life with the great playwright was probably extremely difficult and now they have both ended up in the nightmare that their relationship created.

The half-hour piece is directed by Francesca Zambello and the sets by Erhard Rom are fairly realistic and effective.

With the exception of Pittsinger and Schuman, all the singers are members of Glimmerglass’s Young Artists Program.

_____
A Blizzard on Marblehead Neck by Jeanine Tesori (music) and Tony Kushner (libretto) opened on July 21 and will be performed six times until August 22, 2011 as part of a Double Bill at the Alice Busch Opera Theater, Cooperstown, New York. Tickets and information (607) 547-0700 or www.glimmerglass.org
Posted by James Karas at 5:07 PM