THE PRESIDENT EXHAUSTS AUDIENCE WITH LAUGHTER AT SHAW FESTIVAL 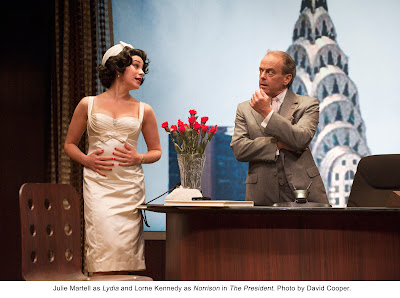 That was the comment of a gentleman as he was walking out of the Royal George Theatre in Niagara-on-the-Lake. No, he was not a stagehand or other worker who had just finished an arduous shift of work. He had just finished watching The President, a one-act play by Ferenc Molnar, adapted by Morwyn Brebner, which lasts for one hour. It is the lunchtime offering of the Shaw Festival and it is performed at such speed that the audience needs a rest at the end.

The President is a farce on a caffeine overdose but it is also an interesting play about transformation. There is no time to notice the latter because you are running as fast as you can to keep up with the farce and are probably laughing too hard.

The plot? Norrison (Lorne Kennedy), a wily, Napoleonic and fast talking corporate executive is looking after Lydia (Julie Martell), the daughter of a very important client. She is supposed to be studying but instead she has taken up with a rather unwashed cabby and become pregnant. Her parents are arriving in one hour and Norrison must turn the Communist taxi driver into a titled, well-groomed corporate executive suitable to Lydia’s moralistic and conservative parents.

Start your engines. Norrison marshals his staff with military precision and machine-gun speed into transforming the cabby Tony Foot (Jeff Meadows) into the sleek Count von Schottenberg Jr. in one hour.

An incomplete list of the items required to achieve the transformation involves precise order of clothes, adoption papers to raise Tony’s social status, the paraphernalia that go with the life of a corporate executive, a shave and a haircut, membership in the right clubs and the proper attitude.

Verbal and physical speed are of course essential to farce but you have never heard anyone talk as quickly as Lorne Kennedy as he orders clothes, food, hotel accommodation and promotions and demotions with mind-boggling speed, detail and precision.

All the other characters are cogs or satellites to the transformation machine that Norrison sets in motion. There are twenty-two characters and they are played by fifteen actors. Peter Millard is a butler-type assistant to Norrison and Michael Ball is a drunken Count who is willing to adopt Tony for the right price and provided he is not older than him like the last one.

Blair Williams directs the verbal and physical breakneck speeding and the result is uproarious laughter and, after one hour, some fatigue.

Molnar’s play was first performed in Budapest in 1929 and has been produced and adapted numerous times ever since. In 1961 Billy Wilder made a movie based on the play, One, Two, Three, starring James Cagney. The current adaptation by Morwyn Brebner was first seen at the Shaw Festival in 2008 and is being revived after allowing sufficient time for people to catch their breath.
______

The President by Ferenc Molnar, adapted by Morwyn Brebner continues until October 9, 2011at the Royal George Theatre, Niagara-on-the-Lake, Ontario. www.shawfest.com.
Posted by James Karas at 11:10 AM