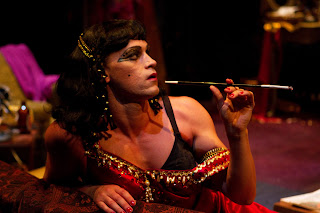 The Stratford Shakespeare Festival has staged an exceptional production of an outstanding and memorable Canadian play. I speak of Michel Tremblay’s Hosanna.

There are productions that I see and forget about them almost completely within a few weeks. There are others that are permanently etched in my memory. Hosanna is one of the latter. I saw the original English-language production at the Tarragon Theatre back in 1974 and still remember it clearly. Richard Monette and Richard Donat were directed by Bill Glassco in those golden days of the flowering of Canadian drama.

Hosanna has only two characters and for a considerable stretch, only one of them is on stage.

The two characters are gay men living in a dumpy one-room apartment in Montreal.

Claude is a farm boy who early in life realized that he is gay. He moved to Montreal’s seedy side and became a drag queen by night and a hairdresser by day. He dresses and makes love like a woman. He has adopted the name Hosanna and his dream is to appear in drag looking like Elizabeth Taylor as Cleopatra.

Raymond, his lover, is the epitome of the tough, macho man, a biker, in fact. He wears a leather jacket, leather pants and boots but age is creeping up on him. He is developing a paunch and he is balding. He has adopted the name Cuirette.

The roles of “man” and “woman” taken by the two men are deceiving. Hosanna is in fact the breadwinner; they live in his apartment and he calls the shots. The unemployed Cuirette does all the housework and is in effect Hosanna’s maid.

At one point Cuirette asks Hosanna “what are you?” and the play tries to answer that question about both men. It is the crux of the play and the plot develops towards an answer to that question.

Gareth Potter and Oliver Becker deliver outstanding performances as the warring couple. The play uses strong, corrosive, blunt language and the two actors deliver it with brute force but also a certain rough lyricism and at times even musicality. Potter as Hosanna has a slight French accent that adds to the effectiveness and splendour of his delivery.

Hosanna has acquired many enemies in the gay community especially at the bar where he/she spends her evenings. The offended drag queens plot to humiliate her. At the opening of the play, he/she is returning from the bar dressed like Elizabeth Taylor as Cleopatra and he/she is crushed and humiliated.

The play moves backward from then on as we uncover the backgrounds of the two men, their relationship and the details of Hosanna’s comeuppance.

Director Weyni Mengesha does a superb job in guiding these extraordinary performances that display all the ugliness of the subculture of drag queens but also the tortured lives and humanity of the two men.

Set Designer Michael Gianfranceso’s bachelor apartment is all that one can imagine in a disgusting place like the one occupied by Hosanna.

The programme contains an Audience Alert: “This production includes mature content, nudity, strong language, haze effects, herbal cigarettes, smoke and the use of strong fragrance.” The Alert should contain the message of “This is a pitch-perfect production of an outstanding Canadian play and everyone should see it.”
____

Hosanna by Michel Tremblay opened on August 10 and will play until September 21, 2011 at the Studio Theatre. Stratford, Ontario. www.stratfordfestival.ca