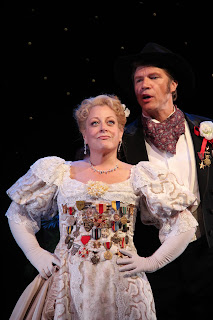 Deborah Voigt as Annie Oakley and Rod Gilfry as Frank Butler in Annie Get Your Gun. Photo: William Brown.

Annie Get Your Gun is a musical that has left its mark on Broadway history for many good reasons. It deals with the American West and show business and that is a pretty good start. Irving Berlin composed some of his most memorable songs for it and even people like me who have never seen a production of it have heard songs like “There is no business like show business” and “Anything you can do I can do better.” Behind all of this lies a performer who is almost as legendary as Annie Oakley and Buffalo Bill, the main characters of the musical. I speak of Ethel Merman.


The role of Annie Oakley was written for her and she belted out her songs with unmatched power and verve. Merman died in 1984 but her association with the role remains.

Francesca Zambello, the Artistic and General Director of the Glimmerglass Festival, assigned the directorial duties for Annie to herself and she clearly wanted the production to be a super success. How do you top Ethel Merman? One way is by finding an opera singer who can sing roles by such lung-busting composers as Wagner and Strauss. If you can do Brunnhilde, Isolde and Salome, Annie Oakley should be a cakewalk. Zambello’s choice: Deborah Voigt.

The Annie Oakley of Annie Get Your Gun is an illiterate sharpshooter who runs into Frank Butler (Rod Gilfry), a sharpshooter with the Buffalo Bill Show. She challenges him to a shooting duel, beats him and then falls in love with him. The rather thin plot is about the shooting contests between Annie and Frank and the struggle to survive by the two travelling troupes, The Buffalo Bill and The Bill Pawnee Show.

There is some light comedy and romance, of course, but what we want is some powerful singing and that means we need a powerful singer. Deborah Voigt is not it. Why can she not open all cylinders and burn the top of our hair with Berlin’s marvelous songs? Erase all thought of Merman. Forget that she is Deborah Voigt. The review would be that of a competent singer doing a good job. But she is Deborah Voigt and we expect a lot more from this first-rate soprano and I know of no explanation for why she does not deliver the goods.

Voigt is a full-sized girl and somewhat past her first blush of youth. If Annie is a young, innocent and beautiful country girl, Voigt bears scant resemblance to her. Voigt moves rather slowly and her comedic talents are rather limited. But we can overlook all of that provided that when she sings “There is no business like show business” some light bulbs are shattered. They did not.

Now compare Voigt’s singing against that of Klea Blackhurst in the role of Dolly Tate, Butler’s assistant. There is someone who showed how Annie could and should be played. Blackhurst, to give her a really high compliment, was Mermanesque.

Baritone Rod Gilfry was excellent as Frank Butler, the thin-skinned shooter who could not bear being beaten by a woman. Being a smart woman and in true Broadway fashion, Annie pretends to lose and finally gets her man.

The rest of the cast was fine from Jake Gardner as Buffalo Bill Cody to Nick Santa Maria as Chief Sitting Bull to Drew Taylor as Charlie Davenport.

The show is colourful, well paced and highly entertaining. This is old, uncomplicated Broadway at its best. It opened on Broadway in 1946 and by that time shows with more complex plots and better integrated characters had already started appearing. The emphasis is on light comedy, easy-to-digest plot and tuneful songs that made up the “old fashioned” Broadway was on its way out.

Some of those shows have survived because of composers like Irving Berlin whose songs raised them above the banality of the plots and made them works of art.

Zambello does not miss a trick in her handling of the production but the idea (it must have seemed brilliant) of casting an opera star as Annie Oakley simply did not pay off.


Annie Get Your Gun by Irving Berlin (music) and Herbert and Dorothy Fields (libretto) opened on July 16 and will be performed fourteen times until August 21, 2011 at the Alice Busch Opera Theater, Cooperstown, New York. Tickets and information (607) 547-0700 or www.glimmerglass.org