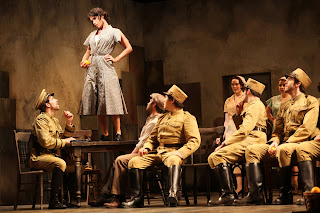 Ginger Costa-Jackson with members of the ensemble in Carmen. Photo: Julieta Cervantes

The Glimmerglass Festival is in full sing. This year Artistic and General Director Francesca Zambello has chosen what has become a classical selection of productions for the Festival: a familiar warhorse: Carmen; a less familiar classic: Medea; an American musical: Annie Get Your Gun and a Double Bill of two premiere productions: Later the Same Evening by John Musto and A Blizzard on Marblehead Neck by Jeanine Tesori.

Georges Bizet’s Carmen may have been a fiasco when it opened in 1875 but it has taken sweet vengeance on all its detractors by becoming one of the most popular operas in the repertoire. Glimmerglass treats us to a new production directed by Anne Bogart with Sets and Costumes by James Schuette.

Let’s cut to the chase, as they say, and line up the essentials for a good production of this opera. We need a mezzo-soprano, a soprano, a tenor and a baritone. Sure there are other roles but we did say the essentials.

Mezzo-soprano Ginger Costa-Jackson gets her first lead role, she tells us, and is singing Carmen for the first time. She gets high marks for her vocal achievement in the role but we will cut her down a notch or two in other respects. Costa-Jackson has a rich, sometimes sultry but luminous voice that feels like delicious chocolate at times. She sang with vocal conviction and if her Carmen is not a sexual magnet it is not because Costa-Jackson cannot sing.

She cannot dance very much but that is no great failing. For the seductive Seguidilla she is placed on the top of a table as if to prevent her from attempting to do too many dance steps. What is more significant and more easily corrected is her hand movements and some mannerisms. Her hair kept falling on her face and she threw it back with one or both hands far too many times. You started hoping that she can finish the phrase that she started before she had to flick her hair back. If not the young singer, then surely the director should have fixed this.

Soprano Anya Matanovic as Micaela is not allowed too many physical movements – she holds onto her shawl and purity, mostly. But she does have to sing and Matanovic delivers Micaela’s purity with her lustrous and beautiful voice. A marvelous performance.

Baritone Michael Todd Simpson is, as they say, tall, dark and handsome, the very image of the toreador who will get (but not keep) the girl. Simpson has the self-confidence of a born winner and he sings with assurance and tonal beauty. His Escamillo can conquer both bulls and women.

I was not as thrilled with the work of tenor Adam Diegel in the role of Don Jose. At times he was so stiff, he looked like a statue on whom pigeons could land. His singing was strained on occasion and although he seemed to be an audience favourite I could not give him more than a B for the night that I saw him.

Carmen opens in a square in Seville, then moves to Lillas Pastias’ tavern, then to an encampment in the mountains and finally to outside the bullring. The busy square in Seville is represented by panels that do not cover the stage and give the impression of an interior scene. With the several tables and chairs strewn around, this could be the interior of an army barracks. What the marching children and cigarette girls are doing there is an open question.

A curtain is drawn half way across the stage and the square becomes an unconvincing tavern. The back panel is removed and I have no idea where we are supposed to be but let’s just say that Schuette’s sets add very little to the production.

Bogart’s direction is generally sound but it does beg a few questions. Aside from some of Costa-Jackson’s mannerisms and some stiffness, why do Carmen and Don Jose not have eye contact or have much to do with each other during the final duet? There is a circle of light on the stage and should they not be there right from the start. Don Jose stabs Carmen in the back and drops her to the floor. He leaves her alone and goes to the back of the stage. Should he not be telling her how much he loves her from closer range and should she not die in his arms?

Carmen was composed with spoken dialogue but the conservative audiences outside France expected recitatives and Ernest Guirard composed them. Bogart sensibly discards them and we hear spoken dialogue albeit in some strange accents. These are Spaniards speaking French and who knows what one is supposed to expect.

Carmen by Georges Bizet opened on July2 and will be performed fourteen times until August 23, 2011 at the Alice Busch Opera Theater, Cooperstown, New York. Tickets and information (607) 547-0700 or www.glimmerglass.org