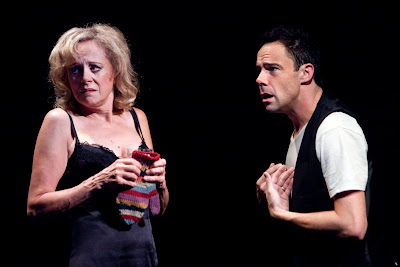 Judith Thompson’s White Biting Dog opens with an arresting image. A man is standing on a bridge ready to jump to his death. He is stopped by a talking dog and returns to his home to look after his ill father. He will also try to reconcile his father with his estranged mother.

We have the brutal reality of a man ready to commit suicide and the fairy tale intervention by an animal to change the course of his life. This sets the tone for this absurdist drama that was first produced in 1984, won a Governor-General’s Award and is now playing at the Young Centre in a production by Soulpepper.

The man who is saved by the white dog is Cape (Mike Ross), a divorced lawyer who had or faked a nervous breakdown and was fired by his law firm. He never smiles, he tells us, and is perhaps a sociopath.

He is living with his father Glidden (Joseph Ziegler) who is suffering from dementia and other ailments and was given one week to live three months ago. He sprinkles peat moss over himself and acts bizarrely like the rest of the characters. (who the father or Cape?)

Cape meets Pony (Michaela Washburn), a young woman who owns the white dog that saved his life. He considers her an angel and she goes into trances and acts pretty weirdly.

Cape’s mother Lomia (Fiona Reid), shows up with Pascal (Gregory Prest), a young stud. They are living together and their apartment just burned down. Lomia is dressed in a nightgown and she is described by her husband as a slut.

The play examines the relationships of the characters and almost never moves on a realistic level. There are numerous striking images like Cape drinking his nosebleed and the fridge being full of bottles of blood. There is a suggestion of an incestuous encounter between Cape and Lomia and a homosexual contact between Cape and Pascal.

Cape falls in love with Pony and the issue of whether Lomia will dump Pascal and return to Glidden moves the plot forward. But, again, nothing in the play is linear or moves in a rational order.

The set consists of some steel columns suggesting the bridge with a cloudy sky in the background. The foreground consists of a couch and table with a raised platform. The set and costumes are designed by Christina Poddubiuk.

The unreality of the play and the dreamlike quality of some of the scenes made me think that Cape did jump off the bridge and the images and events of the play represent his thoughts in the few seconds before his death. His relationship with his parents, his ill and dying father, his whorish mother, his relationship with his wife and his dream for a saviour like Pony and her dog, all come rushing through his mind as he meets his end. Is Judith Thompson imagining that such thoughts may occur to one committing suicide and she has expanded them into a play?

Nancy Palk directs this interesting play with some of Soulpepper’s stalwart actors. Ziegler is excellent as the now potty, now rational Glidden and Reid is equally adept as Lomia. Washburn looks and acts the perhaps angelic and decidedly otherworldly Pony. Prest and Ross both look like sociopaths in their own right.

If you are looking for a play with a linear plot, a beginning, a middle and an end, this is not it. It is an absurd play where images and scenes follow fluidly as in a dream or perhaps a nightmare. I cannot say that I absorbed it all or terribly enjoyed it but it is interesting theatre nevertheless.
________