THE HOMECOMING HAS HUMOUR AND LURKING VIOLENCE AT STRATFORD 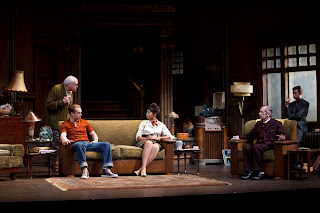 Reviewed by by James Karas


Watching Harold Pinter’s The Homecoming is like walking on a frozen lake. The surface appears flat and solid but the ice creaks with every step that you take. There are pools of water here and there and there are some visible cracks. Danger lurks every time you apply pressure to the surface and you may be swallowed at any moment. Nothing is what it seems but you have no idea what “is”.

The Stratford Shakespeare Festival has assigned the task of capturing the spirit of the play to director Jennifer Tarver and at least one “star” actor in Brian Dennehy and some outstanding local talent.

The plot of The Homecoming is, on the surface, quite ordinary. Teddy (Mike Shara), a professor of philosophy in America, is returning to his home in London. He is accompanied by his wife Ruth (Cara Rickets). He left some years ago and his father Max (Brian Dennehy) and two brothers, Lenny (Aaron Krohn) and Joey (Ian Lake) know nothing about his marriage or children.

We are taken back into family history with all the men telling stories from the past. They are all telling the truth but you cannot believe anything that they are saying. Perhaps it is all true or all lies. Max had a great friend called McGregor. Was he sleeping with Max’s wife? Did he “have her” in the back seat of the cab that Sam was driving?

The boys tell stories of brutalizing woman in a matter-of-fact fashion as if they are simply describing having a beer with a friend. Are the men fantasizing the past or are they factual?

Brian Dennehy plays the brutal but ineffectual paterfamilias and it is indeed a powerful performance. He always carries a stick and you never know when he will use it.

Stephen Ouimette’s Sam is the opposite of Max. Sam is a prissy chauffeur who prides himself on his fine manners and consideration for his customers. People always ask for him, he tells us. Max’s comment is that they can have him for a pittance on Blackfriar’s Bridge. Ouimette captures the nuances of Sam’s character in a fine performance.

Joey (Ian Lake) is training to be a boxer and is physically dangerous but when he tries to have sex with Ruth he is unsuccessful. Lenny pretends to be cerebral and tries to engage Teddy in philosophical arguments but there is unspeakable violence lurking under the pseudo-intellectual façade. Lake and Krohn are well-suited for their roles and do good work subject to my comments below.

The men in The Homecoming speak a lower class London accent and this poses a serious problem for North American actors it seems. Dennehy has a powerful voice and his extraordinary acting manages to camouflage his limited ability with an accent.

Lenny speaks in a high-pitched voice that accentuates his evil side and he does well with the accent. Unfortunately he forgets to maintain the high pitch and lowers his voice about an octave in the second half of the play.

Stephen Ouimette slips in and out of the accent but like Dennehy he camouflages the fault with his fine acting.

Mike Shara’s accent is hopeless and he is miscast as the philosopher who can watch his wife on the couch with his brother. There are other roles he can do; keep him away from anything that requires an English accent.

Car Rickets is excellent as Ruth. She is cool and in the end the tart, as Max calls her, becomes a goddess as she takes over control of the men. Try to figure that one out. That’s what opaque means.

Pinter is famous for his pauses and Tarver wants us to know that they are there but some of them seemed more like coffee breaks.

The Homecoming is an extraordinary play and one cans see it repeatedly and discover new depths and angles every time. This production emphasized the dark humour of the play and the overall impression is favorable. If this were a school project, I would give it a B+ based on the several superb performances but still feel tightness in my stomach every time I hear some of those accents.
___