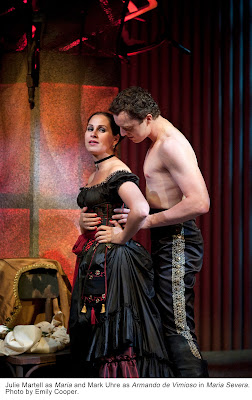 A musical set in mid-nineteenth century Lisbon and based loosely on the life of someone called Maria Severa? And providing a current work inspired by fado music? In baseball, my score would be one for three. Yes, I have heard of Lisbon but the other two facts (I blush) drew a blank until I saw Maria Severa, the new musical by Jay Turvey and Paul Sportelli now playing at the Court House Theatre during the Shaw Festival’s 50th anniversary.

Fado (fate in Portuguese) is described as urban folk music or Portuguese blues and a woman called Maria Severa is credited with introducing it in the 19th century. Little is known about her life and many legends have sprung about her. Sportelli and Turvey have taken their own route and developed a script about a mythical Maria Severa who was a prostitute in Mouraria, a working class district of Lisbon.

She works the district with a Brazilian girl named Jasmine (Saccha Dennis) and they meet two prospective customers, Fernando (Jonathan Gould) and Armando (Mark Uhre). They are aristocratic brothers and live in an estate situated above Mouraria.

Armando’s family is in financial trouble and he is a bullfighter by day. His mother Costanca (Sharry Flett) is planning to marry him off to the wealthy Clara (Jacqueline Thair) for financial reasons. Armando falls in love with Maria.

Maria is also a singer and a composer and she performs at a club in Mouraria. There is a guitarist named Carlos (Jeff Irving) who works there and he is in love with her. There is also her mother (Jenny L. Wright) who will provide some of the broad humour of the musical.

It is not hard to guess that Armando’s mother will object to her son’s choice of woman and will of course try hard to dissuade him from having anything to do with Maria. A priest (played by Neil Barclay) comes in to convince Armando of the error of his ways.

The classic situation has been developed and if all goes well Armando will solve his financial woes and marry Maria. But this is a work composed in 2011 and not a 1931 Broadway musical.

The musical numbers range from accompanied recitatives to some beautifully melodic songs. They cover a broad range from the romantic “Wandering Moon” and “Starlight” to the gritty “Bread and Butter,” the latter referring to prostitution.

Julie Martell is not convincing as a prostitute but she makes a beautiful musician and sings splendidly in the title role.

Mark Uhre is a fine figure of a man, as they say, with a voice to match. He is a matador, a singer, a lover, a man. His one shortcoming is his atrocious table manners and I somehow doubt that his high-breeding would allow him to shovel food down his gullet the way he does here. The fine-toned and sharp-nosed Countess played by Sharry Flatt would have driven those table manners out of him three days after his birth!

Jenny L. Wright is allowed to have a field day in overacting and hamming it up as Mama and is enjoyable. Saccha Dennis is given some license too and provides some contrast to Maria. She is excellent vocally as well.

Jeff Irving as Carlos is a clever, undernourished musician in love with Maria, a woman who is clearly more talented musically than he is.

Jackie Maxwell directs and dramaturges this work. The latter must mean that she helped shape up the plot. In any event, it is a highly enjoyable musical and very educational. Fado, Mouraria and Maria Severa will become almost household terms from now on. No?
_____

Maria Severa by Jay Turvey and Paul Sportelli opened on July 19 and will run until October 2, 2011 at the Court House Theatre, Niagara-on-the-Lake, Ontario. www.shawfest.com.
Posted by James Karas at 11:19 AM