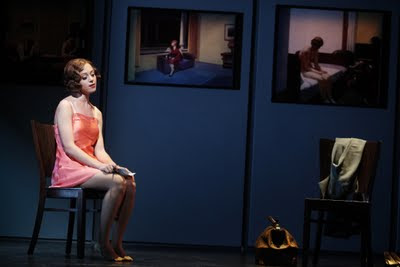 The market for one-act operas can be described quite charitably as very limited. Cavalleria Rusticana and I Pagliacci, like Coke and Pepsi, have cornered the lion’s share of that demand and after one gives some shelf space to Puccini’s triptych and a handful of others, you have hit the bottom of the barrel, mixed metaphor and all.

The Glimmerglass Festival not only offers two one-acters but they are both new works, one of them receiving its first professional production and the other its world premiere.

The first piece of the Double Bill is entitled Later The Same Evening with music by John Musto and a libretto by Mark Campbell. The other is A Blizzard on Marblehead Neck by Jeanine Tesori (music) and Tony Kushner (libretto).

For those who think that opera librettos are mere clotheslines on which composers can hang their arias (and frequently they are) Mark Campbell wants to add a roundly dissenting voice. His tight libretto (the opera takes 1 hour and 15 minutes to perform) is intelligent, complex and fascinating. He puts eleven people on stage and they are all united through five paintings by Edward Hopper and the attendance at a Broadway show.

In a fascinating turn of the imagination, Campbell takes five paintings by Hopper and creates “lives” for them in the opera. The painted figures in Hopper’s “Two on the Aisle”, “Room in New York”, “Hotel Window”, “Hotel Room” and “Automat” become characters whose lives are interwoven when they meet in the theatre.

There is a lot to do and explain in the short time allowed but Director Leon Major moves everything at a brisk speed and achieves a fluidity that makes everything look seamless.

Hopper’s “Room in New York” which shows a man reading a newspaper and a woman playing a piano becomes Elaine (Andrea Arias Martin) and Gus (Kyle Albertson), a warring couple with their marriage on the rocks. Following an argument, she leaves to go to the theatre.

“Hotel Window” shows an elegantly dressed woman looking out of a window but in the hands of Campbell the woman becomes Estelle (Patricia Schuman), a recent widow who is waiting for her date to take her to the theatre.

The woman sitting on a bed in ”A Hotel Room” becomes Ruth (Lauren Snouffer), a failed dancer who is writing to her boyfriend Joe in Indianapolis to tell him that she is going back. Joe (John Boehr) will appear at the Broadway show that everyone is attending and provide a fascinating plot twist.

The man and the woman in “Two in the Aisle” are already at the theatre in the painting but in the life that Campbell gives them they are Sheldon (Neal Ferreira) and his wife Rose (Andrea Carroll) an older, bickering Jewish couple.

That is the type of fascinating combination of art and fiction that makes up the plot to which composer John Musto has added modern music. The cast sing through the various plot strands and the music varies with the character and plot strand. Hopper’s five paintings are always on view and they act as the unifying items of the opera.

There are no show-stopping arias and much of the music sounds like accompanied recitative. Like much modern music, it required some getting used to but like so many new works it will have to shove its way in on the shelf between Cavalleria and Pagliacci and hope that some Artistic Director like Glimmerglass’s Francesca Zambello will find it and stage it again.
_____

Later the Same Evening by John Musto (music) and Mark Campbell (libretto) opened on July 21 and will be performed six times until August 22, 2011 as part of a Double Bill at the Alice Busch Opera Theater, Cooperstown, New York. Tickets and information (607) 547-0700 or www.glimmerglass.org
Posted by James Karas at 10:54 AM