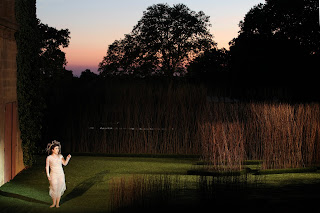 About a dozen kilometers north of Aix-en-Provence, on the Puyricard Plateau, lies the Domaine du Grand Saint-Jean, a 16th century chateau. The countryside of Provence is visible for miles and the grounds of the chateau are an expanse of lawns and trees. The Aix-en-Provence Festival uses an area at the back of the chateau for an open air theatre. It is there that Handel’s Acis and Galatea was staged this summer.

The opening words of Handel’s “Pastoral Entertainment” are “Oh, the pleasure of the plains!” followed by Galatea singing “Ye verdant plains and woody mountains.” You sigh with pleasure at the gorgeous setting so well suited to Handel’s first dramatic work in English.

Then you notice the set. Yes, the floor of the stage is green but there are some moveable hedges that are no more than dry bushes. What happened to the verdant plains? Could they not devise some green shrubs or hedges to serve the purpose? They probably could but they did not.

Acis and Galatea, based on Ovid’s Metamorphoses, tells the love story of the mortal Acis and the semi-divine Galatea. All is fine on the plains and Acis and Galatea sing of their happiness but there is a Cyclops named Polyphemus who will wreck everything.

Acis and Galatea is a static work depending on the beautiful arias, duets and choruses composed for the four main characters and the Chorus of Shepherds and Shepherdesses.

Canadian tenor Pascal Charbonneau is the distraught Acis who is very unhappy about his love life except for the few minutes of bliss allowed him before he is turned into a fountain. He has a beautiful voice and sang superbly. Too bad he was dressed in a torn jacket and when sitting under a tree could have passed for a beggar.

American soprano Joelle Harvey was Galatea. She has a lovely, full and luscious voice and she brought out the joy and sadness of love.

Tenor Rupert Charlesworth was a mellifluous Damon and Grigory Soloviov was Polyphemus. The latter gets to snarl and overact a bit and he could be played for laughs. But Saburo Teshigawara, who directed the production as well as designing the sets, costumes and lighting downplays him. He is dressed in a black costume with a mask that makes him look a bit like Batman but not enough is done with him.

The Chorus of Shepherds and Shepherdesses are dressed in modern clothes indicating that they could not tell a sheep from a goat. They only have to sing though and maybe do a bit of dancing to break up the static nature of the work, sing they can; dance they cannot.

All of the characters were forced to dance and without putting too fine of a point on the subject, let us say that their attempts looked more like the contortions of a person suffering from a debilitating neurological disease than dancing. We would have enjoyed the singing much better if they simply stood still.

Teshigawara has tried to create a modern work out of the pastoral classic by staying away from any ideas of Arcadia with dancing nymphs and idyllic scenes and inserting what I guess is supposed to be modern dance movements. It is a bold step that does not work especially in the milieu of the very pastoral setting of the Domaine du Grand Saint-Jean.
_____

Acis and Galatea by George Frideric Handel, presented by the Aix-en-Provence Festival, was performed between July 9 and 23, 2011 at the Domaine du Grand Saint-Jean, Puyricard, France.
Posted by James Karas at 6:27 PM